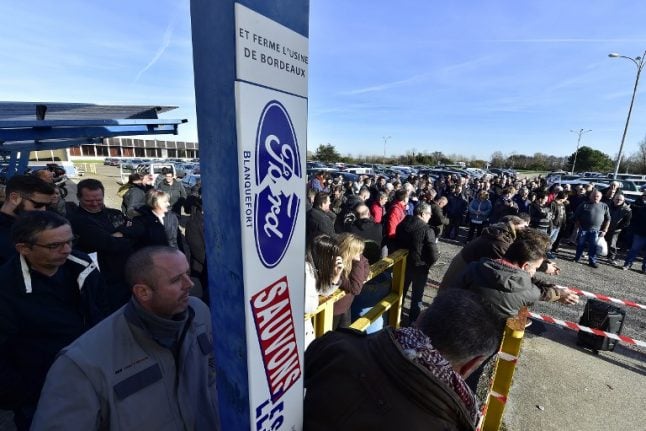 Around 850 jobs are on the line at the Blanquefort plant in the southwest of the country, which has turned out gear boxes for Ford since 1972.

The French government has been involved in negotiations to find a buyer and supported a bid from Franco-Belgian equipment manufacturer Punch Powerglide, based in the eastern city of Strasbourg.

But Ford said Thursday that it planned to reject a takeover offer and would instead offer redundancies to the staff ahead of an end to production there in August 2019.

“I want to denounce the cowardice of Ford, which I have tried to talk to for three days and which did not have the courage to take a call from the economy and finance minister,” Le Maire told senators in Paris.

“I want to denounce the treachery of Ford towards its more than 800 employees at the Blanquefort site,” he added. “They have been betrayed by Ford.”

In a statement, Ford's local subsidiary FAI said that “we do not believe that the plans presented by the potential buyer offer a level of security and
protection, or limit the risk of future job losses, which we are seeking for FAI employees.”

Ford “acknowledges the commitment and efforts of the French government to develop a viable and robust takeover plan, as well as the intensive efforts from the unions of FAI and the potential buyer,” it added.

“It was understandable, it was what we feared, but we had started to hope a little bit,” he told AFP.

The Ford factory has become another battleground between French trade unions and American multinationals that are often portrayed in France as heartless, job-slashing capitalists.

Plans by US appliance maker Whirlpool to close a factory in the northern town of Amiens became a controversy during last year's presidential election
campaign, which was won by centrist Emmanuel Macron — who was born in the city.