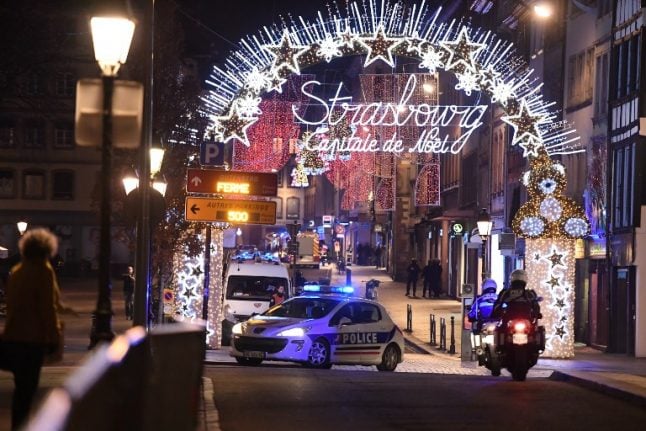 French police were Wednesday hunting a lone gunman who killed three people and wounded around a dozen others at the famous Christmas market in Strasbourg.

Here is what we know about the attack:

An hour of terror Around 7:50 pm (1850 GMT) Tuesday, a lone man opened fire several times in the centre of Strasbourg, which every year holds a Christmas market, drawing
in huge crowds of shoppers and tourists.

The suspect was quickly identified as a 29-year-old man born in Strasbourg and already known to the police.

“Soldiers of the Sentinelle force used their weapons to try to intercept the assailant, and between 8:20 pm and 9:00 pm he twice confronted our security forces with systematic exchanges of fire,” he said, referring to soldiers deployed under the country's anti-terror operation, in place since attacks in 2015.

In his attack, the man killed three people and wounded 11 others, five seriously and six slightly, before fleeing and rushing into a taxi, according
to a source close to the investigation.

The taxi driver, unscathed, told police the suspect was injured on his left hand. He reportedly got out of the taxi near the city's police station.

The military reported that a soldier was also lightly wounded by the ricochet of a shot from the attacker.

The busy Christmas market site had been under close surveillance due to the high jihadist threat, especially since it was the target of a planned attack in December 2000. The suspect was well known to the authorities and had been convicted in France and Germany and served his sentences, the minister said.

In 2016 he was flagged by anti-terrorist services, according to a source close to the investigation.

“The attacker, who was on the S list (of extremists watched by police), is actively being hunted by security forces,” local officials said in a statement.

He had been reported by the General Directorate for Internal Security (DGSI) intelligence agency during a visit to prison where he was noted for violence and religious proselytism, according to the source.

Before the attack on Tuesday, the fugitive was already wanted for armed robbery, according to a source close to the case, while another source said he
was linked to an investigation of attempted homicide.

Earlier the same day, police had searched his home but found no trace of him.

While his precise motives remain to be established, the anti-terrorist prosecutor has found sufficient clues to open an investigation for “assassinations and attempted assassinations in connection with a terrorist enterprise”.

Paris public prosecutor Remy Heitz was due to speak on Wednesday, Castaner said. Significant resources have been deployed to track down the fugitive.

On the ground, 350 people have been mobilised, including 100 police personnel supported by two helicopters, officers from elite units, and also soldiers of Operation Sentinelle, which protect sensitive places which could be terrorism targets, the minister said.

Additional resources were also to be sent to Strasbourg which would be under strengthened surveillance.