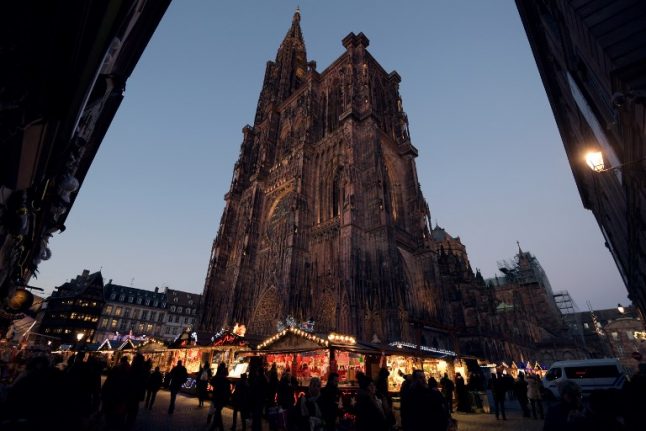 “We knew his was going to happen one day,” a Strasbourg resident told French daily Libération. “We knew the city was a target, especially at Christmas. We just weren't expecting it to happen tonight.”

“This is a first for Strasbourg, it's really a peaceful city,” said medical student Antoine. “It's hard to imagine what comes next, because we've never been through something like this.”

The famed Christmas market has long been a prime target, with French authorities foiling a bomb plot as far back as December 2000, when four men suspected of Al Qaeda links were arrested.

Strasbourg’s reputation for being the French 'Capital of Christmas' is a well-founded one. The city’s Marché de Noel is believed to be the oldest in Europe, the first Christkindelsmärik being held in 1570.

Last year, it drew two million visitors from France and further afield, more than any other Christmas market in the country. Strasbourg’s most celebrated festival also offers a huge financial boost to the eastern city every year, and there has even talk of it becoming a UNESCO heritage site.

Access to the island formed by the River Ill is tightly controlled via the nearly 20 bridges connecting it to the rest of the city.

For Christmas, the island becomes home to around 300 wooden chalets warming visitors with mulled wine and sausages, under the dazzling lights of a 30-metre (100-foot) fir tree in Kleber Square. All these sources of pride and profit are now under threat following Tuesday’s gunning down of fifteen Strasbourg Christmas market-goers by a lone assailant, two of whom have died and twelve of whom are injured.

The psychological scars and subsequent fear effect that such ruthless attacks leave on a city’s spirit will no doubt hit attendance hard at this and other marchés de noel across France in the days to come.

So far Strasbourg mayor Roland Ries along with the organizers of Strasbourg’s Christmas Market (which was scheduled to run from November 23 to December 30) have only announced that market stalls be be closed on Wednesday December 12, as well as all other related events being cancelled in the city five kilometres from the German border.

If Christmas 2018 were to be literally cancelled as a result of the attack, vendors, hotel owners and anyone else with financial links to the city’s tourism industry would feel the pinch.

According to 2016 figures published by Alsace’s Regional Tourism Observatory, Strasbourg’s Christmas market costs the city €2 million to organize but pours €250 million back into the local economy every year.

December alone represents 15 percent of Strasbourg hoteliers’ annual turnover, with occupation reaching 80 percent during the busy Christmas period. Such is the demand from home and abroad for accommodation that prices are put up by 30 percent during December, making a one-stay in a three-star hotel more expensive on average than Paris.

And while Strasbourg may stand head and heels ahead of the rest of France when it comes to Christmas-themed hype and profits, the historic and cultural region in which it lies – Alsace (what is now known as Grand-Est region) – is an overall Christmas market powerhouse.

Colmar, Nancy, Metz, Sélestat, Mulhouse, Haguenau: all these Alsatian towns and cities a stone’s throw from Strasbourg hold Christmas markets renowned for their warmth and authenticity.

Their local economies also receive a major boost during the festive period, a trend which could be bucked if attendees lose confidence in the region’s Christmas markets as a safe haven for couples and families. None of them have announced they will close their marchés on Wednesday following the Tuesday attack on Strasbourg, but extra security forces will be deployed in all Christmas markets across Alsace and France as a whole.

Strasbourg authorities have previously considered the threat of a terror attack on the millions marketer-goers they receive each year, bumping up the security budget from €250,000 in 2015 to €450,000 in 2016 following several terror attacks in the French capital.

Increased security reinforcements have also been deployed in other Alsatian Christmas markets, even though none can be deemed as big a target for extremists as the French capital of Christmas: Strasbourg.