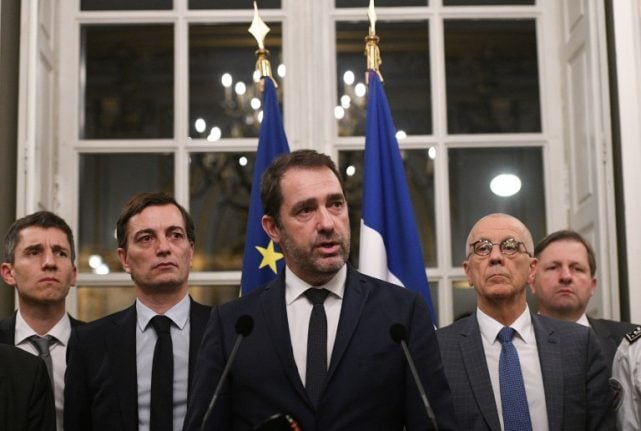 The suspect has been named in French media as Cherif C, 29-years-old. He was born in the city where he opened fire to deadly affect on Tuesday evening.

Cherif C was well known to the authorities and had been convicted in France and Germany of a number of crimes mostly for theft an violence. He lived in a small apartment in a rundown housing block in the Poteries area of Strasbourg about a 20-minute tram ride from the centre of the French city and its Christmas market

Giving a press conference in Strasbourg on Wednesday French prosecutor Remi Heitz told media that Cherif C had 27 previous convictions, most of which occured in France, but also Germany and Switzerland.

Before the attack on Tuesday, the fugitive was already wanted for armed robbery, according to a source close to the case, while another source said he was linked to an investigation of attempted homicide.

The mayor of Strasbourg Roland Ries said the suspect had “a long criminal history” while Interior Minister Christophe Castaner said he had “served his sentences”.

Reports in Germany say he served a prison sentence there until 2017 for aggravated robbery, after which he was expelled to France.

On Tuesday morning, the day of the shooting, French gendarmes visited the Strasbourg home of Cherif C to arrest him over his suspected role in a bank robbery and attempted murder, but he was missing.

His presumed accomplices had all been rounded up by police.

But the suspect didn't just have a criminal past, he was also known to intelligence services for his links to extremist Islam.

In 2016 he was flagged by anti-terrorist services, according to a source close to the investigation. “The attacker, who was on the S list (of extremists watched by police), is actively being hunted by security forces,” local officials said in a statement.

He had been reported by the General Directorate for Internal Security (DGSI) intelligence agency during a visit to prison where he was noted for violence and religious proselytism, according to the source.

It is believed he had close links to radical Islamist groups in the Meinau neighbourhood of Strasbourg.

The job of French investigators is now to determine what drove Cherif C to open fire at the city's Christmas market.

The shooting appears at first sight to be another sickening terror attack carried out at a location French authorities had long feared could be targeted by terrorists, but the government and police had initially kept an open mind about the shooter's motives.

The alternative theory is that the shooter may just have cracked after realising his accomplices had all been rounded up and he was likely heading back to prison for another spell behind bars.

However speaking to the media on Wednesday French prosecutor Remy Heitz confirmed the shooting was being treated as a terrorist attack.

“Terrorism has once again struck France,” he said, adding that the Cherif C was heard by witnesses shouting “Allahu Akbar” as he went on his rampage.

France's anti-terrorist force have been placed in charge of the investigation.

The path of Cherif C from career criminal to jihadist is a familiar one.

In recent years the profiles of many of those who have carried out terror attacks in France were similar.

For example Karim Cheurfi, the gunman who killed a policeman before France’s presidential election had served more than 12 years in prison for shooting at police officers. He had been jailed four times between 2001 and 2014 for attempted murder, violence and robbery.

Ziyed Ben Belgacem, who was shot dead at Paris Orly airport after trying to grab a soldiers gun to shoot others had a lengthy criminal history of violence, robbery and drug offences

Authorities in Belgium have dubbed these criminals turned terrorists “gangster jihadists” and are concerned about a huge rise in their number.

Those same concerns have long been held in France.

Some 25,000 people are currently on the “S” extremism watchlist, 9,700 of them for radicalism “linked mainly to Islamist terror movements,” according to the interior ministry.

There are also scores of people locked up in French prisons for various terror related offences. The fact many are due to be released in the coming years is why French authorities keen insisting the terror threat will remain for at least a generation.