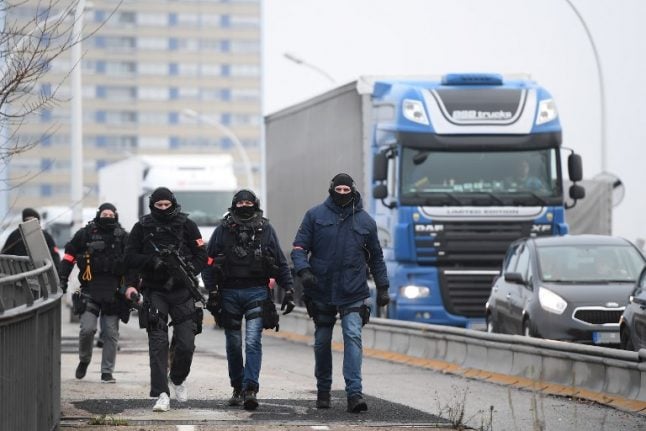 German police control vehicles at the border between France and Germany in Kehl on late December 11th. Photos: AFP

French Interior Minister Christophe Castaner announced in the early hours of Wednesday that his government has adopted the maximum security response possible following an attack by a lone gunman that killed at least three and wounded a dozen at Strasbourg’s famous Christmas Market.

Its aim is to ensure the maximum level of vigilance and security, activated when the government deems that there still exists the threat of another imminent attack.

“This is the highest level on a scale of three,” French police chief Sarah-Lou Cohen told BFMTV.

“It allows us to increase controls, put in place exceptional measures in terms of police deployment and carry out more systematic searches at train stations and airports.”

These extra measures and resources are likely to prove essential to French security forces given Strasbourg’s proximity to the German border, just five kilometres.

“The objective is to put people out of harm's way,” Cohen added.

“The gunman has committed an attack, he could commit another.”

In this case the “emergency attack” alert concerns the entire country, but in other incidents it can be used just for a certain region.

It is likely to only remain in place for a short period of time. The lowest level of Vigipirate is “vigilance”, with the second level being “reinforced security/ risk of attack”.

Specifically, some roads, public transport routes or schools can be closed. The army under the Operation Sentinel – which was launched after the Charlie Hebdo terror attack in January 2015 – are also drafted in to boost security.

On a lower level the raised alert could mean members of the public being systematically asked to show ID and have their bags searched at specific locations.

French police will boost their numbers at border crossings and carry out more checks.

However the government has ruled out for the moment anyway, bringing back the state of emergency that was brought in after the November 2015 Paris attacks.

In Strasbourg itself the Christmas market will remain closed and the centre of the city where the shooting took place is still cordoned off, although schools were open. Hundreds of French security forces are currently on a manhunt to find the lone gunman who killed at least three people and wounded 12 close to Strasbourg’s busy Christmas market on Tuesday night.

The gunman has been identified and was on a watchlist of suspected extremists, a statement from local security services said.

French authorities also fear the attack could spur other copycat assailants to mimic the gunman’s actions and take advantage of the hustle and bustle of France’s countless Christmas markets to carry out more deadly shootings.

Around 350 people – including police, military troops and helicopter pilots – are now on the heels of the attacker who has “sowed terror” in the eastern French city, Interior Minister Christophe Castaner said.