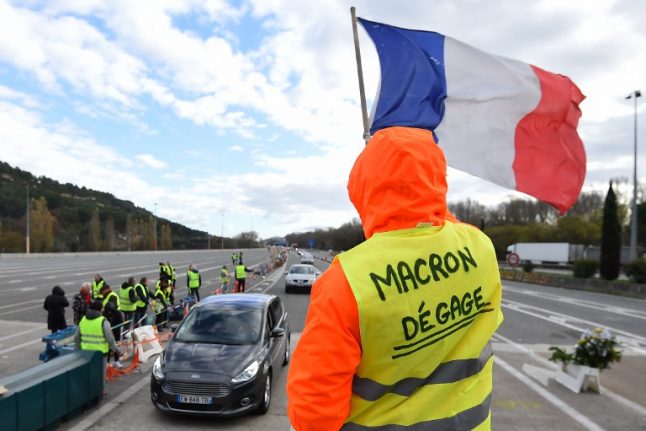 Les Gilets Jaunes, or yellows vests, otherwise known as high-visibility vests. Drivers in France are obliged to have one in their vehicle by law, turning the garment into an easily distinguishable and symbolic uniform for protesters who wore them during the first roadblocks.

La taxe carbone, or carbon tax, is where the “yellow vest” movement has its roots. The tax placed on fuels that release harmful gasses into the environment was introduced as an green measure but ended up making it prohibitively expensive for drivers to fill up their tank.
But Macron himself talked of the real cause of the movement being the colère (anger) of the peuple (people) that has grown over 40 years and the ras-le-bol (this is hard to translate literally but means fedupness or discontent) Manifestants (protesters) talk of the the ras-le-bol fiscal or injustice fiscal (tax discontent or tax injustice).

This sparked the first manifestation, or protest, and in the following weeks the number of yellow vest mobilisations (rallies) across France grew, including opérations escargot (go-slows, or snail operations if translated directly), barrages filtrants at ronds-points (filtered road blocks at roundabouts where cars are allowed through at a slower pace) rassemblements (another way of saying rallies), blocages (blockades), défilés (marches) and, unfortunately, affrontements (clashes).

A lot of the yellow vests’ anger has been focused on President Macron, with popular protest chants including:

Macron dans ton cul! – This literally means Macron up your ass or would b better translated as “Macron up yours!”

On n’est pas des moutons! – We are not sheep!

There is hope that Macron's announcements can lead to a trêve (a truce) or perhaps even the la fin du mouvement (the end of the movement). Most protests have been organised via Facebook and other social media, where popular hashtags for the movement include:

Les revendications, or the demands, of the yellow vests have grown to encompass a sprawling range of issues including social security, constitutional amendments, tax law, employment rights, schools, the retirement age, migration and social issues.

As could be expected, not all gilets jaunes agree over what they really want, but the following points make it into most yellow vest protesters' list of demands.

Le pouvoir d’achat, or spending power, which most protestors feel they don’t have enough of their salaries have remained stagnant while…

Les factures, or the bills, notably gas and electricity, have gone up, as well as…

Les impôts, or taxes, which keep rising. There have been calls for reductions in taxes and national pay rises, especially a rise in… “A minimum wage rise of €100, really?”, reads the headline of this Nouvel Observateur story on Macron's new measure. Photo: Screenshot

Manifestants pacifistes, or peaceful protestors of all ages including families and, les retraités, or pensioners, have attended demonstrations to have their complaints heard, but in recent weeks their cause has been overshadowed by…

Les casseurs, or hooligans/rioters/thugs, who were at the heart of dramatic scenes of violence and destruction during yellow vest protests on the Champs-Elysées in Paris over the last few weekends. During that violence there has also been saccage et pillage (ransacking and looting). Only on Saturday December 8, there were almost 2,000 interpellations (arrests) across France. Of these detainees, 1,700 were placed in police custody (garde à vue).

Les blessés, or the injured, are in the hundreds after several week of violence and chaos. There have also been three deaths so far at yellow vest protests.

Les dégâts, or damages in Paris include les pavés or cobble stones being ripped up and used as weapons, les vitrines, or shop windows, being smashed and shops pillées, or looted, as well as voitures brûlés, or burned out cars, and graffiti being scrawled on symbolic monuments nationaux, or national monuments, like the Arc de Triomphe. All of which has lead to the state of…

La crise, or crisis, which France currently finds itself in, with no clear way out. Les représentants, or the representatives of the yellow vests are hard to pin down. Eight were elected via Facebook while many more have emerged through exposure in the French media. The government has tried to enter into le dialogue, dialogue, and le débat, debate, with some yellow vest representatives with some refusing and others agreeing.

L’acte V, or part 5, referring to the fifth week of protests is currently expected to take place on Saturday 15th December all over France.