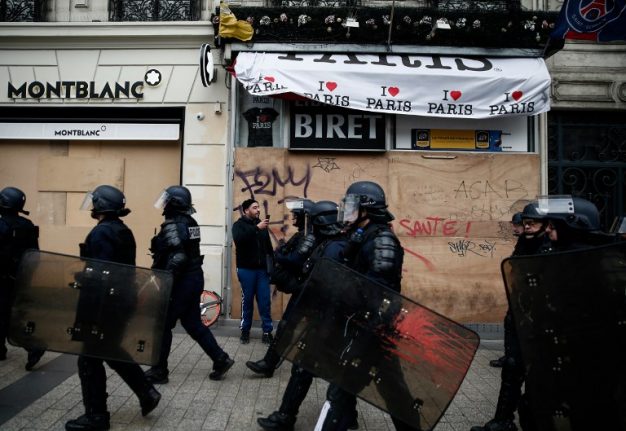 As riots flared in Paris on Saturday, Livio Forte, a tourist from New York, could only watch on as police trucks lined up on the Place Vendome.

The chic square's luxury jewellery shops were boarded up, the diamonds and watches gone from their windows to protect them from looters.

The trip had been intended as a romantic surprise for his wife Carmela's 59th birthday. At least, they joked, it would be a memorable one.

The couple had planned a trip to Normandy to see the beach where Carmela's father fought in World War II, but ended up cancelling it because of anti-government roadblocks. The Eiffel Tower, museums, department stores — all closed on what would normally be a bustling Saturday in the run-up to Christmas.

The US embassy had issued a warning to Americans to “avoid crowds” in Paris, while Belgium, Portugal and the Czech Republic advised citizens to postpone trips altogether.

For a third weekend running, shops were looted in the French capital, their windows smashed, cars torched and barricades burned in the streets.

Riots also shook other French cities popular with tourists, including Bordeaux and Toulouse.

“It's a period when commerce is usually brisk, just before Christmas — but this, this is a catastrophe,” Finance Minister Bruno Le Maire said as he visited Parisian shopkeepers.

He promised “direct” help for businesses affected, as Emmanuel Macron prepares to address the nation this week in a bid to end the deepest crisis of his presidency. Clad in their luminous safety jackets, the “yellow vests” show no sign of calling off weeks of protests over rising living costs and accusations that Macron only looks out for the rich.

The government has yet to release an estimate of how much damage the demonstrations have dealt to the economy.

But the central bank's forecast for fourth-quarter growth, released Monday, will give an early indication.

With tourists reluctant to risk being tear-gassed on a trip to Paris, the National Hotel Chains' Group estimates reservations for the New Year down at least 10 percent.

Le Maire's ministry estimated last month that large retailers had seen a 15 percent drop in revenues and small businesses a drop of up to 40 percent.

“The smaller a business is, the more fragile it is,” Francois Asselin, head of the CPME confederation of small and medium-sized businesses, wrote in the Journal du Dimanche newspaper. – The cost of concessions –

He has called on the government for help, and urged banks to offer more credit to businesses and accept delayed loan payments as the crisis rumbles on.

Beyond the costs to the private sector, there's the considerable hit to public coffers from concessions made to the protesters.

This week Macron scrapped the planned rises in fuel taxes which first sparked the protests among car-reliant workers in small-town and rural France.

That is set to blow a hole in the budget of around two billion euros ($2.3 billion).

In addition, there's the 500-million-euro relief package for low-income families which he had already offered in a failed bid to mollify the protesters.

Macron had planned to reduce France's deficit to 2.8 percent of GDP this year, just under the EU-mandated 3.0 percent limit. But further expensive concessions could jeopardise that when combined with other risks such as a potential fall in investment as a result of the protests.

Le Maire insisted this week that France would meet its targets.

“The president fixed a course for respecting our European commitments, reducing our expenditure, reducing our debt and reducing our taxes. This course will be respected,” hw said.

In the meantime, shopkeepers targeted by the rioters are counting the costs.

In the northwestern 17th district of Paris, an optician despondently surveyed the contents of his ruined store.

Far from the touristy centre, authorities and shopkeepers alike had expected this area to avoid trouble.

“They took everything. Everything,” he said.