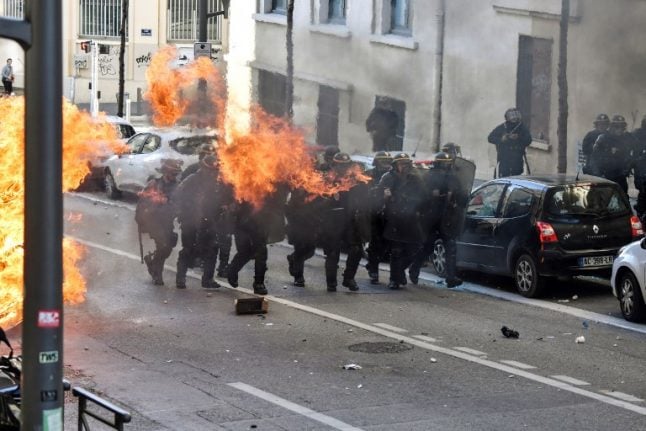 Photo: AFP
Act IV (Act 4), the name given to the fourth weekend of protests in France, is just around the corner and the French government and police authorities are busy preparing in an attempt to keep the violence and destruction down to a minimum.
The French presidency revealed on Wednesday that it fears there will be “major violence” from an “extreme core of several thousand” coming to the French capital.
The interior ministry has spoken of the likely presence of the “extreme-right who dream of a revolution and the extreme-left who advocate insurrection”. And they are concerned their numbers will be boosted by youths from the poor Paris suburbs, some of whom took advantage of the mayhem to loot stores last weekend, according to police.
And then there's the fringes of the yellow vest movement which appears to have become more radicalized in recent weeks.
As a result the French PM said “exceptional means” will be devoted to keeping order across the country on Saturday.
A total of 89,000 police officers – up from the initial figure of 65,000 – and law enforcement staff will be deployed across France on Saturday, 8,000 of whom will be in the French capital.
The PM confirmed that 12 armored vehicles from the gendarmes military police will also be deployed to the capital, but the decision whether or not to send them onto the streets will be taken on the day.
“Given what has happened it is absolutely necessary to take all the possible measures to stop the rioters taking hold of this movement,” said Jérôme Bonner, a police spokesperson. In all, some 79 police units, including CRS riot police officers, are set to be mobilised in the capital on Saturday December 8th compared to the 50 who were on the streets last weekend.
And there is a new strategy — this time police officers have been instructed not just to be mobile but also to directly engage with protesters, meaning that the situation could be even more violent than the riots seen last weekend.
“We are going to try to intervene as quickly as possible at the flash points to arrest the main thugs to try to suffocate the violence,” said Denis Jacob from the police union Alternative Police.
Around a dozen museums are closing across the capital including the Grand Palais and shops on the Champs-Elysées have been ordered to close for the day.
READ ALSO: The city's police chiefs have promised that officers from all units will be present, including the French Anti-Crime Squad known as the BAC, the territorial brigades and all Paris police station staff will be on duty on Saturday.
Even units not accustomed to carrying out everyday police work, such as the SDLII, which fights illegal immigration, will have 500 officers on the ground.
A crisis unit for police officers confronted with “particularly violent incidents” has been created, according to reports in the French press in order to offer officers legal assistance if necessary.
All emergency services will also be mobilized on Saturday.
Security will also be tight on the French capital's public transport network, with transport police officers stationed at railway stations and Metro stations.
Meanwhile, the capital's transport operator RATP is already planning to divert or suspend dozens of bus lines around the Champs-Élysées, as well as at Porte Maillot near Neuilly-sur-Seine in the western suburbs of the capital, Trocadéro, near Opera, Hotel de Ville and Gare du North and Gare de l'Est.
French President Emmanuel Macron on Wednesday urged politicians and union officials to launch a “call for calm”, with French Prime Minister Edouard Philippe echoing that call in parliament and urged politicians to be responsible.
“What is at stake is the safety of the French people and our institutions. I call here for responsibility,” said Philippe.
“All the actors in this public debate, politicians, union leaders, editorialists and citizens, will be accountable for their statements in the coming days,” he added.
In a move they hoped would help appease protesters the government announced it was completely scrapping the planned fuel tax hikes for 2019, yet it appears demonstrators are unsatisfied and are ready to push for more concessions that will help boost their spending power.
The anxiety of the French authorities is evident in view of the prospect of another day of violence in the heart of the capital which is still under the shock of last weekend's riots.
There have been dozens of calls to demonstrate in Paris on social media on Saturday, with many naming the Champs-Elysees — the scene of riots on December 1st — as the meeting point.
For more information on what the protester's have in store for Paris this weekend CLICK HERE.