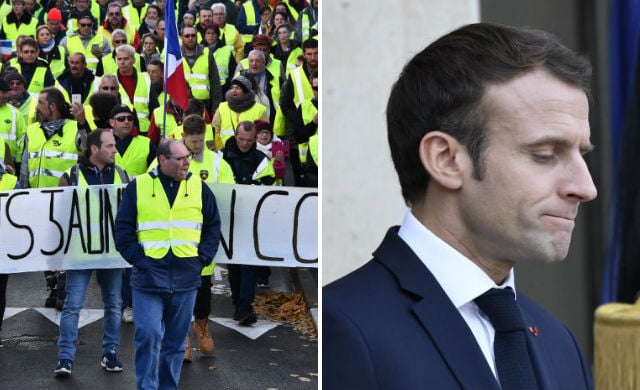 Photo: AFP
“In 2017, his election was greeted as a sign of hope by his European neighbours after the Brexit referendum and Donald Trump's election in 2016,” Nicolas Baygert, professor of political communications at the Universite Libre de Bruxelles, told AFP.
Seen from Berlin or Brussels, the centrist Macron represented a “bulwark against populism” and a determined advocate of deeper European integration at a time of rising divisions within the bloc, Baygert said.
But shocking scenes of rioting and destruction last week in Paris, which forced him into a U-turn on fuel tax hikes, have raised questions abroad over his ability to reform France — let alone the European Union.
Fears for European elections
Two images from the Champs-Elysees that reverberated around the world encapsulate the stunning fall in Macron's stock.
On November 11, around 70 world leaders including US President Donald Trump gathered under the Arc de Triomphe war memorial at the top of the avenue for a ceremony commemorating the end of World War I.
READ ALSO: Leading the ceremony, Macron was widely commended for his statesmanship, including his refusal to be drawn into a war of words with Trump, who later
attacked his host on Twitter for castigating nationalists.
But three weeks later, the world watched in shock as rioters swarmed the Arc de Triomphe, spraying it with anti-Macron slogans and smashing sculptures inside during a protest over inequality.
“The contrast between the two images is striking,” Baygert noted.
The scenes of mayhem in France have rattled Macron's EU partners in particular.
“Macron is well liked by his European neighbours for his unbending approach in a country that has long been seen as incapable of reforming itself,” Vincent Laborderie, a professor of political sciences at the Catholique de Louvain, also in Belgium, told AFP.
The French government has insisted that its reformist zeal remains undented and that it stays committed to cutting the budget deficit.
But with demonstrators continuing to block schools and shopping centres, and radicals gearing up for a third round of violent protests in Paris on Saturday, mainstream European parties are worried that a new populist wave is being unleashed, a few months before European elections. Photo: AFP
“If Macron does not act… there is a risk that it will end in a massive nationalist victory in the coming European elections,” Spanish daily El Pais wrote in an editorial on Tuesday. “France cannot afford that. Nor can Europe.”
With German Chancellor Angela Merkel in the autumn of her rule — bowing out after electoral setbacks for her party in which the far right made strong gains — Macron had been expected to lead moderates into May's European Parliament elections.
“If the situation continues to deteriorate in France… Macron will no longer be able to occupy this role,” Laborderie said.
Salvini, Trump cheer
In an analysis for The Washington Post, the writer Ishaan Tharoor said the riots had undermined Macron's reputation as one of the few politicians on the world stage who could stand up to the tide of populism.
“Macron likes to present himself to the world as the suave centrist who can hold the line against the anger of the fringes. But at home, he's a politician under siege, at risk of being overwhelmed by a growing rebellion,” Tharoor wrote.
Trump was among those who appeared to derive satisfaction from Macron's woes.
On Tuesday, he seized on Macron's climbdown on anti-pollution fuel taxes as a vindication of his decision to pull out of the 2015 Paris Agreement on climate change, which he said imposed too heavy a financial burden.
“I am glad that my friend @EmmanuelMacron and the protestors in Paris have agreed with the conclusion I reached two years ago,” he tweeted.
Macron's chief European adversary, the far-right Italian Interior Minister Matteo Salvini, also appeared cheered by his troubles.
“Macron is no longer a problem for me or for Europe,” Salvini said on Monday.
The shine had already begun to come off Macron's presidency in recent months, with Western media that had sung his praises starting to voice concern over stagnant growth in France, the limited effects of his first wave of reforms on job creation in the eurozone's second-biggest economy, and his failure to gain traction with Donald Trump on trade, climate change and Iran.
Commenting on the shift, the Spanish newspaper La Vanguardia wrote: “It's a tough blow for Macron. His image will never be the same again.”