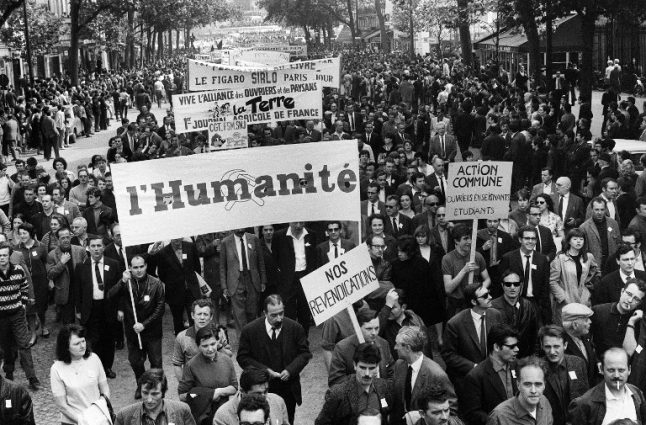 Protests in Paris during May '68. Photo: AFP
Jogging through one of the poshest districts of Paris last weekend, 33-year-old Belgian Augustin Terlinden suddenly found himself face-to-face with a car going up in flames.
“Evidently the revolutionary tradition is still very much alive in France,” he said with a smile.
Some 200 cars were torched and more than 400 people arrested during the “yellow vest” demonstrations on Saturday, the worst clashes in the capital in decades.
“Paris is burning,” read headlines in the international press.
What started in mid-November as road blockades over fuel taxes has spiralled into violent protests against Macron, seen by demonstrators as out of touch with ordinary people.
On Tuesday, in a bid to quell the demonstrations, his government announced the fuel tax hikes would be suspended for six months. Photo: AFP
It was an unprecedented U-turn from a president who previously vowed he would not be swayed.
Abroad, some observers have been tempted to see in the protests confirmation that rebellion is something that simply runs in French blood.
Swiss newspaper Le Temps described France, which executed its king in an ultimate act of anti-elitism in 1793, as a “country which has always given in to temptations of violence”.
'The state must listen'
But Michel Pigenet, a historian at the Paris 1 university who specialises in social movements, insists otherwise.
“Violence during demonstrations is not a particularly French tradition,” he said.
“But it's true that France has a tradition of collective mobilisation which has given rise to a sentiment that 'the state must listen to us, one way or another'.”
When he came to power in May 2017, Macron vowed that protests would not blow him off course in his bid to dynamise the French economy and attract investment.
Mass demonstrations plagued the five-year term of his Socialist predecessor Francois Hollande, who was forced by protests to abandon a so-called “eco tax” on heavy goods vehicles.
But the French penchant for refusing to take government policy lying down has far deeper roots. French workers union CGT general secretary Philippe Martinez takes part in a demonstration in April. Photo: AFP
Published four years after the Revolution erupted, the 1793 constitution safeguarded a “right to insurrection” against any government that was not listening to the people.
While that constitution is long gone, “the idea is still there,” Pigenet said.
Protests 'get results'
Olivier Cahn, a professor at the University of Tours, said the tradition has taken root because protests “often get results” in France.
After the momentous May 1968 protests which rocked French society — and left several dead — the government raised the minimum wage by a third.
In 1986, reforms denounced by critics as introducing selective university education were axed after the death of a student.
And in 2006, violent protests prompted the government to scrap a new type of job contract, which was intended to make hiring easier but was seen by critics as increasing economic insecurity.
On the other hand, top-down protests organised by trade unions have often fizzled in recent years, like the mass demonstrations in 2016 which failed to kill off labour reforms.
“There is a growing movement which wants more violent methods than those led by the unions, which are considered a bit humdrum,” said Erik Neveu, a
sociologist at the Sciences Po Rennes university. Photo: AFP
That may help explain why public support for the “yellow vests” has remained fairly high despite its increasing violence.
A BVA poll carried out after the weekend's clashes found 71 percent still supported the movement.
“There are at the same time those who feel sorry for the shop-keepers whose windows get smashed, and those who say, 'This is the only way we'll get there',” Neveu said.
He says that's one factor explaining why previously moderate protesters joined in with the violence last weekend.
Pigenet noted that violence at demonstrations has been on the rise since the 2000s, a phenomenon he believes is partly due to the weakening of “other forces in society which usually give structure to protest movements”.
Trade unions in particular have declined in influence in recent years — not least under Macron.
Until the “yellow vest” movement emerged, rolling rail strikes over the summer against his sweeping reforms of state operator SNCF had posed one of the biggest challenges of his presidency.
He won that battle — but the “yellow vests”, a spontaneous movement with no clearly identifiable leaders, pose a different challenge entirely.