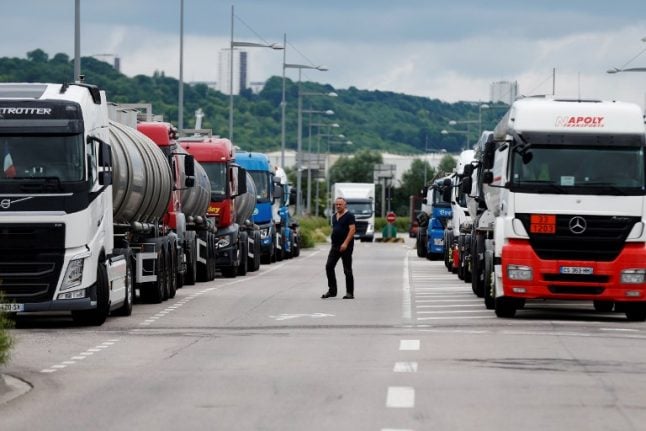 UPDATE: Since this article was written the two truckers unions have since called off their strike after talks with the government

The two unions representing lorry drivers are calling on members to down tools from Sunday night onwards as part of their protest over the cuts to overtime rates.

Their call to strike comes as the anti-government “yellow vest” protest movement shows no sign of abating, despite the French government's announcement to scrap the planned fuel tax hikes in January.

A joint statement from the CGT and FO unions said: “This is about defending real wages, just like the Gilets Jaunes (yellow vests).”

The two unions described the measures announced by French PM Edouard Philippe to appease the anger of the yellow vests as “crumbs”.

But their main gripe is a decision of country's highest court, the council of state (Conseil d'Etat) to bow to two employers' organisations and cancel a decree that forced them to pay drivers higher overtime rates.

The unions are demanding a meeting with the minister of transport.

“If we don't get guarantees on the maintaining of overtime hours we will intervene across France, firstly with the truck drivers and then with other sectors like cash-transport vans and refuse collectors.

If Sunday's rolling strike goes ahead it's unclear what impact it could have on motorists, but in the past striking truckers have blocked motorways and fuel depots.

The leading French farmers' union is also set to ramp up the pressure on Macron by holding their own protests.

“We will be on the street next week to demand an end to the bludgeoning of farmers,” said Christiane Lambert from the FNSEA union.

Farmers' unions want to make sure the government is on their side during fraught negotiations with distributors over the prices paid for produce.

“The president said he was going to work to restore revenue for farmers. He must not give in to pressure from certain distributors,” said Lambert.

Farmers are expected to hold their protest on Wednesday morning.

While the number of “yellow vest” protesters setting up filtered road blocks around France have vastly reduced since November 17th there are still operations taking place, particularly in Brittany, where fuel depots are being blocked.

This has led to shortages of petrol at filling stations around the country with the west of the country hardest hit.

This link contains an interactive map to see how severe the fuel shortages are in your area.