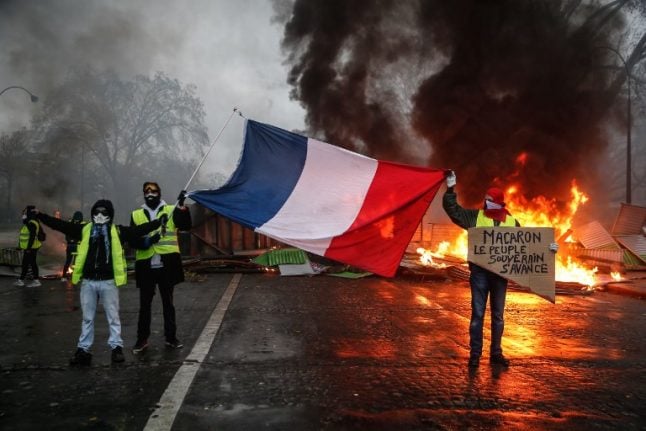 The protests in Paris on Saturday December 1st. Photo: AFP

As with previous yellow vest protests, mass demonstrations are being organised online on social media sites like Facebook, with several thousand already suggesting they were ready to take part in more demonstrations.

Many of the events and those who are interested in going are calling for more disorder in the capital.

Protests planned for next weekend under the name Acte IV (Act 4) refer to the fact that this could be the fourth weekend of protests in France.

A pinned post for one Facebook event planned for this Saturday, shows the yellow vest movement apparently “at the top of its game” in video footage of fights between protesters and police near the Arc du Triomphe filmed last weekend. In the discussion for the event, Acte 4 – Vous avez carte blanche à Paris (Act 4: You have free reign in Paris), over 1,000 people have confirmed they will be attending and 6,000 have said they are interested, suggesting that protesters are gearing up for more violent conflict with the authorities this weekend.

“Stop telling us to be peaceful… why should we act like reasonable people when the government doesn’t?” one wrote.

Another added, “in the event of Act 4 the police will have the army and security companies with them. They want nothing more or less than a war.”

Many yellow vest organisers are invoking France’s revolutionary history as justification for more unrest in the streets this coming weekend.

Another Facebook event “Acte IV: Aux Armes Citoyens”, taking place at the Eiffel tower on Saturday morning, is named after the famous line from the national anthem encouraging citizens to take up arms. The event has more than 3,000 confirmed attendees and a further 21,000 interested in going.

Appropriately, one commenter plans “to bring Molotov cocktails to force the barricades!”

While another, anticipating police clashes, has called on “all people who are able to give first aid, put a big red cross on the back and front of your yellow vest. We’re going to need you.”

A total of 13,000 protesters have either confirmed or are thinking of attending the “Acte 4: Appel National” (Act 4: National Call) in the capital, with commenters in the event discussion drawing comparisons between today’s yellow vest protests and the infamous period of civil unrest in France during May 1968. “In '68 protesters weren’t called hooligans! Stop being sheep and have some balls!” one commenter wrote under an image showing chaos and destruction in the streets of Paris during demonstrations in the 60s.

Another commenter urged others to share an image of a demonstrator from May '68 hurling objects at police barricades.

Printed on the image are list of changes the May '68 protests brought about followed by the caveat “incredible violence was unfortunately necessary to achieve all this.”

While protests are being planned at famous landmarks like the Eiffel Tower and Place de la Bastille, some yellow vests are also calling for more targeted action.

They have suggested taking the protests to wealthy areas of Paris and the headquarters of news outlets BFM TV and TF1, who they feel have “discredited the movement” with news coverage biased against the yellow vests.

Non-violent protests are also being planned in the capital on December 8th, but even among this group it seems there is support for the “hooligans” and all the media coverage they have received.

One yellow vest posted, “it’s thanks to them that we are being heard.”