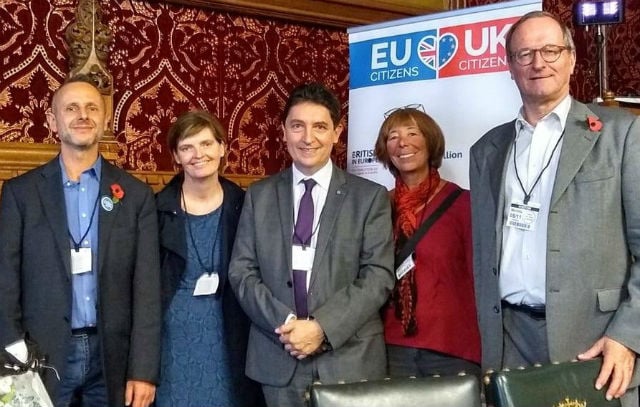 Senator Olivier Cadic in the centre with representatives of British citizens in Europe and EU citizens living in the UK. Photo: British in Europe.

“They (British citizens) are a priority,” France’s Europe Minister Nathalie Loiseau told The Local this week. London must show they see the French in the UK in the same way, she added.

French Senator Olivier Cadic, who represents French citizens abroad, echoed Loiseau’s goodwill towards Brits in France in an interview with The Local..

“I will deal with the British in France as if they were the French in the UK. The same way. They are not responsible for the situation. They are victims,” Cadic, France’s senator representing French citizens abroad, told The Local.

Cadic said Brits in France represent an “added value” to local economies across the country, often in areas that have suffered from depopulation or economic depression in recent years.

“In many cases, they came to villages in France that were dying and made an impact. They represent an added value for many places in France. I will do my best to support them,” he said Cadic, suggesting the French government is keen to do the same. “They have lost so much because of the devaluation of the Pound Sterling. Especially business owners and pensioners.”

With less than two weeks to go until the UK parliament votes on the draft Brexit deal, Brits in France and French citizens in the UK face a tense countdown.

READ ALSO: 'You are a priority': French minister tries to reassure anxious Britons in France

If the agreement is approved, Brits in France and those who make the move before December 2020 will be entitled to the package of rights contained in the draft Withdrawal Agreement.

That means Britons who come to France before the end of the transition period, December 2020, will be able to stay and carry on working, studying, drawing a pension, and accessing healthcare here. They will likely have to go through a registration process to obtain a post-Brexit residency permit although the details of what this might involve have not yet been made public. Britons are being urged to apply for a Carte de Séjour as soon as possible.

Brits will, however, lose their current treaty right to freedom of movement throughout the EU27 (under the current proposed deal).

French citizens in the UK will be offered a similar residency package known as “settled status”.

The situation becomes more complicated if the UK parliament rejects the deal British Prime Minister Theresa May is lobbying MPs to approve. MPs, senators, public officials and campaigners in EU27 states have suggested citizenship rights should, and could, be ring-fenced regardless of the fate of the Withdrawal Agreement..

Both the3million group, which represents EU citizens in the UK, and British in Europe, the grassroots group which represents Brits in the EU27, will step up their demand for citizenship rights to be ring-fenced should the deal agreed by the EU and the UK this month fail to make it through Westminster.

“I'm more worried about the young British, I'm really worried about them. If they are living in France, they will no longer be able to go freely to Germany, Spain or Italy for example for work,” adds Cadic.

“A lot of French citizens in the UK are worried about their future. They are worried, for example, about the devaluation of the currency – their assets and pensions are in sterling. Many pensioners who have their money invested in a British retirement fund are worried if they will be able to stay,” says the senator.

READ ALSO: Emotion and relief: How Brits in France feel to have secured their futures amid Brexit anxiety

Cadic, who says he helped bring 1,000 French companies to the UK in the last 22 years as part of his work, adds that he himself could leave the country because of the increased climate of hostility towards foreigners.

“I was very happy there (ED: in Kent) until Brexit,” Cadic told The Local. “Now everything has changed. The reception of people from abroad is different. Maybe they didn't like foreigners before, but now they show it.”

“People are much more careful about speaking their own language,” Nicolas Hatton, chair of the3million – which represents EU citizens in the UK – and himself a French citizen resident in Bristol, told The Local. “It used to be banter. Now it has turned ugly,” added Hatton.

Senator Cadic sees no benefit for the UK in Brexit and has challenged Brexiters to demonstrate the point. “Maybe some Brits dream about the exit. The French do not. That's why I said to Jacob Rees-Mogg: 'Give me one single reason why this is an advantage'. He couldn't,” Cadic said

Have you already signed up for The Local's weekly roundup of original reporting on Brexit? To join thousands of other subscribers and get the latest news on how Brexit will affect citizenship rights, trade and the UK's future relationship with the EU, sign up here.