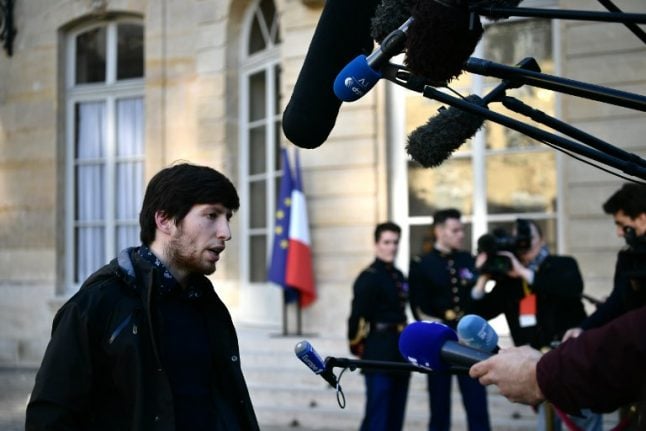 Attempts by the French government to negotiate with the “yellow vest” movement responsible for weeks of protests over taxes and the high cost of living turned into a fiasco Friday after just two representatives turned up for a meeting with the prime minister and one immediately walked out.

The failed talks came on the eve of a planned rally in Paris of thousands of demonstrators, one week after a violent protest left the Champs-Elysees in shambles.

Prime Minister Edouard Philippe had invited eight representatives of the protesters, known as “yellow vests” for their wearing of the high-visibility
yellow jackets which every motorist is required to carry in his car, for the talks in a bid to take heat out of a revolt that has galvanised opposition to President Emmanuel Macron's liberal economic policies.

But only two turned up for the talks at the prime minister's office, with one walking out after being told he could not invite TV cameras in to broadcast the encounter live to the nation.

Asked later by reporters what his demands were, Jason Herbert said: “We want our dignity back and we want to be able to live from our work, which is absolutely not the case today.” Herbert said the two representatives who had turned up for the meeting had received “physical and verbal threats” from other protesters, some of whom are opposed in principle to having appointed leaders.

Emerging from an hour of talks with the second representative, Philippe said the pair had mainly discussed spending power and that his door “will always remain open” for further dialogue.

One of the difficulties faced by the government in seeking to talk to protesters is that the mainly-spontaneous grassroot movement, organised
through social media, has steadfastly refused to align with any political party or trade union.

Macron has refused to back down on his anti-pollution taxes, part of his effort to green the economy.

Speaking on the sidelines of the G20 summit in Argentina Friday, he said he understood “the legitimate anger, the impatience and the suffering of some people” and called for more time to organise consultations on how to transform France into a low-carbon economy without penalising the poor.

But he also warned that any measures announced “in the coming weeks and months” would “never be a retreat” on policy.

Two people have died and hundreds have been injured since protesters, mainly in rural and smalltown France, began blocking roads over soaring fuel prices which they blame on Macron's anti-pollution taxes.

The protests quickly snowballed into wider protests over economic hardship and the perceived elitism and urban bias of Macron's government.

On Friday, minister for overseas territories, Annick Girardin, who was on a peace mission of her own to quieten the protests in the Indian Ocean island of Reunion was forced to cut short a meeting with demonstrators after being booed by protesters shouting “Macron, resign!”

Macron's government has announced several measures to try end the unrest, which triggered near riots on the celebrated Champs-Elysees avenue in Paris last Saturday.

But the president's refusal to back down on a planned increase in anti-pollution taxes on fuel set to take effect in January has hardened the resolve of many protesters, including in Reunion, one of the poorest parts of France.

Demonstrators there have blocked roads across the island over the past two weeks, crippling the local economy.

On the mainland, the government is bracing for further possible rioting when demonstrators return to the Champs-Elysees on Saturday to press their demands, which include a moratorium on fuel tax increases, an increase in the minimum wage and a national housing insulation plan.

The government has said it will allow the Champs-Elysees protest, but the avenue will be closed to traffic and protesters searched by police before
being allowed onto the avenue. Around 300 people demonstrated near major European Union buildings with some protesters throwing objects including cobblestones and pool table balls, a police spokeswoman said.

After being dispersed by water cannon, protesters set fire to two police vans.