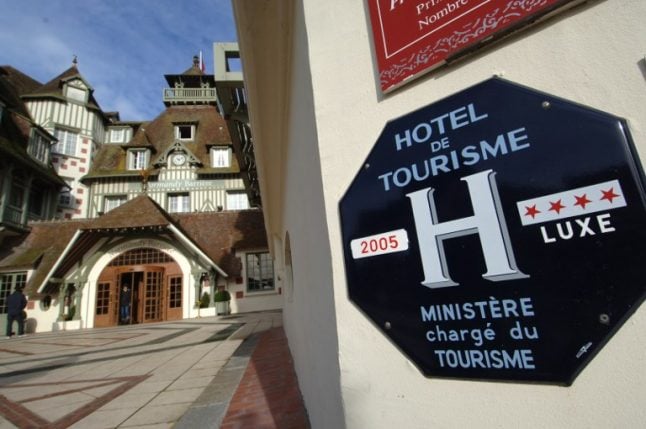 Photo: Mychele Daniau, AFP
The INSEE report on French tourism released this week looks at the number of overnight stays in hotels and other tourist accommodation over the summer in France.
Throughout the country overall, numbers have risen by 1.3 percent from 2017 to total 311 million overnight stays.
They had risen sharply the year before, but this was due to a 'catching-up' phase after tourists turned away from France en masse after the 2015 terrorist attacks.
However, these figures are spread very unevenly throughout the country.
This summer, Paris and the Ile-de-France department around it saw the highest rise (up 7.7 percent) of overnight stays followed by Normandy (up 5.3 percent), the Hauts-de-France region stretching directly north of Paris to Calais (up 4.9 percent)  and the Grand Est region which includes Strasbourg and the Vosges mountain range (up 4.1 percent).
There was similar good news in the western regions of Brittany and Pays-de-la-Loire where there was a 3 percent in overnight stays.
Both Brittany and Normandy can thank the rise to the jump in the number of foreigner visitors, particularly from Britain.
Of all the nights spent in tourist accommodation by Britons in France, some 27.8 percent were from the UK.
But the once much-visited summer holiday destination of Provence and the region Provence-Alpes-Côte d'Azur that it is in, isn't proving as popular as it was (down 2.0 percent).
Nor is the Auvergne-Rhône-Alpes region in the country's centre east which includes the Loire, parts of the Alps and the city of Lyon and where numbers are also down (-2.4 percent), or the Occitanie (-0.9 percent).
In individual departments, these figures fell even lower. In the southwest for example, in the Dordogne, overnight stays were down 3.9 percent, in the Lot down 4.1 percent and in the Gers minus 5.7 percent.
The map of France below reveals which departments saw an increase in tourism (those shaded green) and those which saw a fall (those shaded dark pink). The INSEE study also revealed that regions with high mountains, mainly the Alps and the Pyrenees struggled this year with numbers falling 6.6 percent this year.
People clearly prefer France's coasts. They attracted the most tourists totalling nearly 200 million overnight stays this summer – with the Mediterranean coming top. Urban areas have the next greatest pull raking in a total 115 million nights this summer.
READ ALSO:
89 million tourists: Why France is still the most visited country on earth