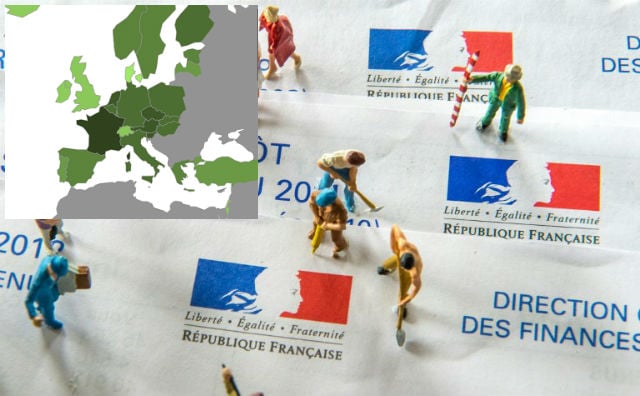 It's official France is the most taxed country in the EU.

According to the latest Eurostat report that looks at the percentage of a country's GDP that comes from tax receipts France is top of the European league.

At the bottom of the table came Ireland where tax receipts only make up 23.5 percent of GDP. The tax-to-GDP ratio stood at 35.4 percent for the UK.

Part of the reason France topped the table was because it had the highest ratio of social security contributions (cotisations sociales) to GDP.

Some 18.8 percent of France's GDP comes from social security contributions which unlike income tax are automatically deducted from incomes for salaried workers in France.

The next in line was Germany where the ratio of social contributions was 16.7 percent.

When it came to basic income tax, which from next January will be deducted at source in France, the percentage of the GDP was 8.7 percent, which put the country behind the UK where the ratio just for income tax was 9.2 percent.

The report from Eurostat – the EU's statistics machine – sees France top the table for the third year running and comes at a time when the country is in the middle of a long running anti-government protests inspired by the French public's anger over the taxes they pay.

Yet the French have historically tolerated and defended paying high taxes as the price to pay for the public services as well as the welfare state that provides protection for the worse off.

But the ongoing yellow vest protests suggest the French,  or at least the lower middle classes, have had enough of paying such high taxes.

As part of his budget over the last two years President Emmanuel Macron has tried boost spending power of workers by cutting the social contributions.

But with fuel taxes rising along with the price of petrol, those workers who rely on their car for a living, might not have noticed any extra money in their pockets.

Macron has the yellow vest protesters for sticking to his plan to raise taxes on petrol and diesel in January.