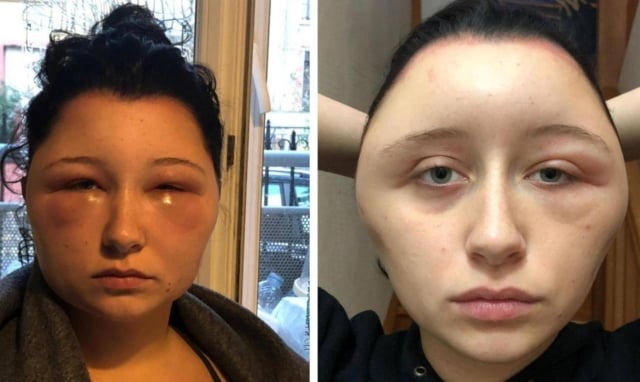 Nineteen-year-old Estelle stunned social media users in France after she posted on Facebook a sequence of alarming photos in which her face looks increasingly swollen and intoxicated.

The English undergrad student almost died as a result of the allergic reaction she suffered to PPD – the abbreviation for paraphenylenediamine- a common compound found in 90 percent of hair dyes despite its known allergic risks.

“Look, here I could still see; here I was struggling to breathe, “ she told French daily Le Parisien in an interview as she scrolled through the photos on her phone.

Days earlier Estelle had decided to go from blonde to brunette and bought a standard DIY hair colouring product at a supermarket in Val-de-Marne, on the outskirts of Paris.

Having previously suffered a mild reaction to a hair dye, she decided to use the allergy test that comes with the product, but waited only 30 minutes before applying the dye, rather than the recommended 48 hours.

First, her scalp began to itch. Then, the top of her head started to swell up.

Estelle decided to pick up some antihistamines and cream at the pharmacist, hoping the meds and some bed rest would clear up the reaction.

But the next morning when she woke up, she caught a glimpse of her reflection in the bathroom mirror.

“My forehead had doubled in volume,” Estelle explains. “My head was like a light bulb”.

Her mother rushed her to the emergency room where caregivers told them these reactions to PPD were reasonably common, even though her head circumference now measured 63 cm rather than the average 56.

After being given more antihistamines as well as corticosteroids, Estelle and her mother were told they could leave, despite their own suspicions that the allergic reaction was far from subsiding.

“I had the feeling of being trapped in a jar,” Estelle recalls.

While on their way to another hospital the following day, Estelle’s tongue swells up, her heart starts racing and she has difficulty catching her breath.

Upon arriving at the emergency room, doctors give the young woman an adrenaline injection, admitting her overnight until her life is out of danger.

Since surviving her ordeal and sharing photos of her increasingly disfigured face online, there has been an outpour of reactions from other women in France who have suffered allergic reactions to hair colouring products, as well as from hairdressers arguing the need for these treatments to be carried out by professionals.

“It’s true that she didn’t follow the instructions word for word but the warning has to be clearer,” Estelle’s mother argues.

Please specify on the packaging that the product contains PPD, a highly allergenic product that can lead to catastrophic reactions.”

Estelle’s face is now back to its normal self, but she wants her dreadful experience to act as a warning to the industry and to other women who dye their hair.

“I almost died, I don't want something similar to happen to other people,” she concludes, in the knowledge that her allergic reaction was more severe than on average.

According to France’s National Syndicate of Dermatologists, between 2 and 3 percent of the population is allergic to PPD, an alarming figure when considering their estimates that half of all people in France dye their hair at some point in their lives.

The substance has been banned in other cosmetics such as make-up but for hair dye products EU regulation bodies have chosen to lower the amount of PPD rather scrap it all together.