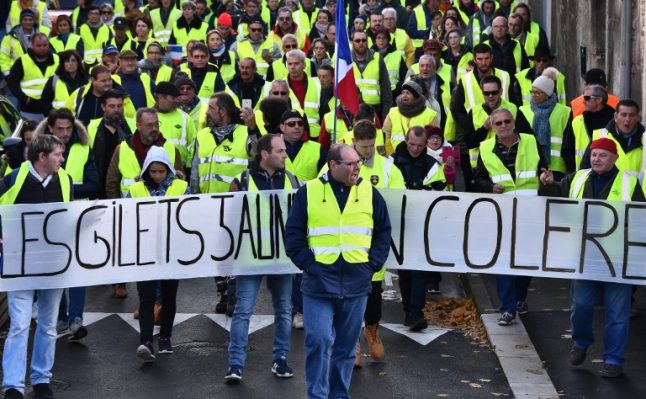 Photo: AFP
The 'yellow vest' fuel protesters have finally heard from the French president.
In a speech in front of France's National Council for the Ecological Transition (CNTE), composed of elected representatives, unions, NGOs and associations on Tuesday, Macron presented his plan for nuclear energy and took the opportunity to announce some measures in a bid to appease the gilets jaunes (yellow vests) fuel protesters.

“I believe deeply that we can transform anger into solutions,” Macron said.

And while he offered minor concessions the president refused to capitulate entirely.
Macron made it clear that the hike in fuel taxes on diesel and petrol that will come into force in January, will not be scrapped.
“What I've taken from these last few days is that we shouldn't change course because it is the right one and necessary,” he said.
What Macron said that might appease the gilets jaunes
In an hour-long speech, Macron repeated several times that he had understood the anger expressed by hundreds of thousands of people who have taken to the streets in high-visibility yellow jackets.
He conceded that many French people felt that taxes were “imposed from above” and promised to accelerate the work of the government to lighten the load for working families and cut public spending.
“We need to change working methods,” he said.
Macron did offer a concession, saying he would propose a mechanism to adjust tax hikes when they occurred at the same time as an increase in oil prices internationally — as they have this year.
And he called for a three-month national consultation to draw up a roadmap for accelerating the country's transition away from fossil fuels — which he insisted remained his overall objective.

One of the newly appointed official spokespeople for the 'yellow vest' movement Jason Herbert said in an interview with BFM TV that he feels the consultation suggested by Macron “goes in the right direction but isn't a strong enough signal that there is an urgency to deal with the situation”.
Macron also instructed his Environment Minister Francois de Rugy to hold talks with the eight people nominated as spokespersons for the gilets jaunes, which will take place on Tuesday afternoon at the Environment Ministry
Macron said he does not want the push to protect the environment to accentuate inequalities between those living in rural France and those living in cities.
“I refuse to accept a two-speed France,” he said, adding that he does not want those with the most modest incomes to have to fork out more because they don't have the money to make the shift to greener cars and sources of heating – known as the “ecological transition”.
On a similar note, the president said during his speech that “the car does have a future in France”
For Emmanuel Macron, the conversion grant which some people will receive to help them afford a more environmentally friendly car will be boosted goes hand in hand with the transport bill announced on Monday and will help create jobs in the automotive industry.
Macron also stressed that he was under no illusions about the fact that a citizens movement had been tainted by extremists.
“I do not confuse the rioters and the fellow citizens who protest,” he said, referring to the incidents of violence, such as the riots seen at the protest in Paris on Saturday, that have been associated with the movement.
“I do not confuse these unacceptable acts with the protest movement they are associated with.”