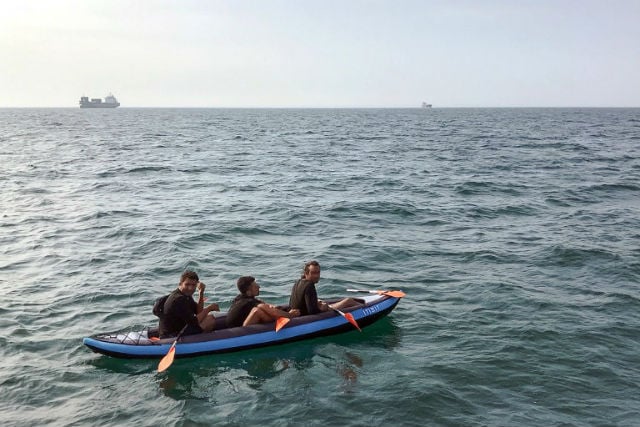 Three migrants rescued in an inflatable canoe in August 4. Photo: AFP/STR
Two of the five were suffering from hypothermia when they were rescued just offshore about 15 kilometres (nine miles) west of the port of Calais, they said.
The rescue is just the latest in a series of such attempts to get to Britain, with 18 migrants rescued overnight Thursday to Friday.
France warned earlier this week of a spike in migrants attempting the dangerous crossing of the English Channel by boat to reach Britain, which could reflect fears the border will be shut after Brexit in March.
READ ALSO: France warns of surge in migrant attempts to reach Britain by boat
Britain's interior ministry said Thursday some 78 migrants had been picked up over the past two weeks.
Migrants have long massed along France's northern coast hoping to stow away on trucks heading for Britain, where many have family or believe they stand a better chance of getting asylum or finding a job.
But starting in 2016, officials began seeing attempts by migrants to use dinghies and inflatable rafts to cross the 33-kilometre (20-mile) Strait of Dover, one of the world's busiest shipping channels.