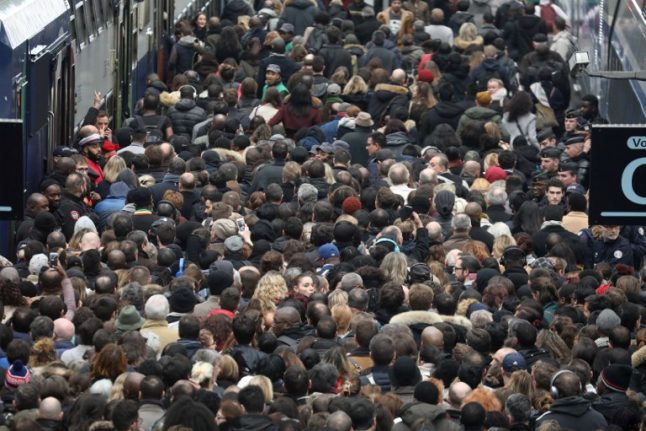 Photo: AFP
France's National Institute for Statistics and Economic Studies (INSEE) has released its 2018 “social portrait” of the country which sheds a little light on life in modern France, how it has evolved and how it compares to life in other countries.
We've picked out a few stats that paint a picture of modern France. Although some of them date back to 2016, they are the most recent stats INSEE has available.
Standard of living
The French are enjoying a slightly higher standard of living, according to France's national statistics agency, INSEE.
Standard of living means disposable household income and in France this figure is rising.
In 2016 the median disposable income (the midpoint rather than the average) for households in France was €20,520 per year, representing an increase of 0.9 percent compared to 2015.
This is the first time the median of standard of living has been this high since before the financial crisis back in 2007, according to INSEE.
According to the report, if you look closely at the lowest income households compared to the highest income ones, unsurprisingly you see that there is a significant disparity between the two.
For example, the 10 percent most modest households have an average disposable income of €11,040 annually while the 10 percent wealthiest people in France have an average of over €37,570 in spare cash. 8.8 million below the poverty line
Since the 2008 financial crisis, France's poverty rate has been on the rise, according to the report by INSEE.
The poverty rate is worked out according to the percentage of households with a income of below 60 percent of the median standard of living which works out as €1,026 per month.
The latest report from INSEE reveals that the percentage of people living in poverty in France dropped a negligible amount in 2016 to 14 percent compared to 14.2 percent in 2015.
The total number of people living below the poverty line in France is, according to INSEE, 8.8 million.
In 2013 the average percentage of people living in poverty across Europe was 17 percent.
Looking at the bigger picture, the poverty rate in France was on the decline from 1996 to 2004, rose up until 2011 and since then has been declining very slightly year on year.
READ ALSO: Photo: AFP
Birth rate on the wane
France has long had one of the highest birth rates in Europe, but 2017 marked its third consecutive year of decreasing birth rate after eight years of relative stability.
A key finding from INSEE showed that the number of births dropped by 17,000 in 2017.  It stands 1.88 children per female in France after having dropped below the symbolic 2 children mark three years ago. Rising number of female immigrants
In 2015, there were 6.1 million immigrants living in France, making up 9.2 percent of the population.
The immigrant population in France has been on the rise since 1999 and in 2015, four immigrants out of ten present in France have become French, according to the report by INSEE.
And the percentage of female immigrants is on the rise.
In 2015, 51 percent of immigrants were women compared to 44 percent in 1968.
In 2015, women made up the majority of immigrants who had arrived in France since 2010, especially among those from south-east Asia, Algeria and Morocco and European countries outside the European Union.
The average working week is not 35 hours…
In 2017, the average length of a working week was 37.2 hours not the 35 hours many people believe the French work.
And this number rose even higher for those working full-time, with those employees putting in 40.5 hours a week on average.
For those who are self-employed in France, such as farmers and entrepreneurs, the figure increased even more to 53.6 hours. Women and men
As of January 1 st 2018, women represent 51.6 percent of the population in France which translates to 2.1 million more women than men.
However, more boys are being born than girls and there are more males in the 0-25 age bracket where they represent 51 percent of the population.
But from 26 onwards the gap gradually widens favor of women and for the over 65s men represent just 43.1 percent of the population and 38.7 percent among the over 75s.
At the beginning of 2018, there were 13,900 women who had lived to the age of 100 compared to just 2,900 men.
The elderly
As of January 1st 2018, 13.1 million people living in France are 65 years of age or older, which is equivalent to 20 percent of the population.
This figure is increasing over the years, with France at the same level as the European average.
The majority of the elderly in France choose to remain living at home, with 93 percent of elderly women living at home in 2015 and 96 percent of men — and this figure includes those in their 90s.
Women tend to be more affected by widowhood and live alone more often.
In 2018, this was true of 28 percent at age 65, 38 percent at 75 and 55 percent at 85.
High life expectancy
The INSEE study revealed that life expectancy has risen by 0.2 percent for men and remained stable for women.
In 2017, men in France have a life expectancy of 79.5 years while women can expect to live to 85.3 years. The Europe-wide statistics included in the report, which are from 2016 rather than 2017, show that the average life expectancy in Europe was slightly lower at 83.6 years for women and 78.2 years for men.
Highest amount spent on welfare in the EU
France is known for having a generous welfare system and now here's the proof.
In 2016, France spent 32.1 percent — or €759.1 billion — of its gross domestic product (GDP) on welfare, according to INSEE, which is more than any other European country.
In Denmark and Finland, spending on welfare also exceeded 30 percent, while in countries like Poland and Ireland, social spending was much lower.
The average spending on welfare in the European Union was 28 percent.
READ ALSO: