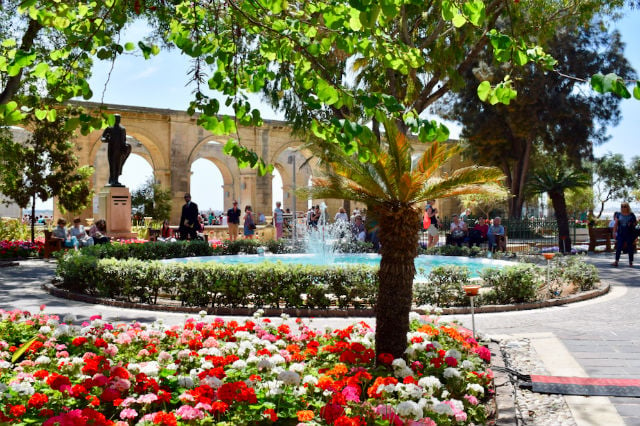 I hadn’t known what to expect from Valletta, Malta’s recently-rejuvenated capital city.

I wondered, would it resemble the Italian towns with their blend of Renaissance facades and Neoclassical architecture? After all, Malta is anchored in the Mediterranean just a stone’s throw from Sicily.

Or would it reflect its more recent British history? The country did spend over 150 years as a British Crown Colony, gaining independence around half a century ago.

What I discovered was neither. Or rather both. And so much more.

Start planning your trip to Valletta

‘A city made of sunlight’

Flanked between two harbours, Malta’s gleaming capital is a fortified peninsula packed with over 300 monuments.

Even outside the city walls there's plenty to admire, from the newly-restored Triton Fountain to the swanky Phoenicia Hotel. But what stunned me most was how pristine everything looked. In every direction sun beat off unblemished limestone; the effect was a city seemingly made of sunlight.

The same can be said once you’re inside the city gates. Even the newer buildings have been carefully designed in the same sandy-coloured stone, harmoniously blending old and new.

While some could argue that a string of occupations have robbed Valletta of its character, instead they seem to have forged it. Each of Malta’s historic rulers have left their distinctive mark on the country and nowhere is it more evident than in Valletta. The city is a wonderful melting pot of different architectural influences and the effect is a fascinating journey through five hundred years of history.

None of Malta’s rulers have had such a prominent effect as the Order of St. John, an international military order that ruled the Maltese islands between 1530 and 1798. Commanded by a series of Grand Masters hailing from countries across medieval Christendom, it was under the Order that Valletta was first established in 1566.

Over five hundred years later, the characterful little city can only be described as a charming mishmash of architectural styles; here a Baroque church, there a Mannerist theatre, punctuated with the occasional Victorian kiosk or iconic red telephone box. Even the long, straight streets are a snap-happy Instagrammer’s dream with their picturesque clutter of colourful wooden balconies.

It’s lively, too. No longer a sleepy pensioners’ retreat, Valletta is fast becoming one of Europe’s most happening cities. Once the city’s debaucherous red light district, Strait Street is now a buzzing social hub packed with bars, restaurants, and live music venues.

Thanks to a packed calendar of events there’s no shortage of things to do, with everything from visual arts performances to renowned film and literature festivals.

And one thing’s for certain: you won’t go hungry during your stay.

Much like the city itself, Valletta’s culinary scene is a wonderful combination of intercultural cuisine. Watch the world go by in the piazza at Caffe Cordina, a 175-year-old restaurant and tea shop serving local dishes and pastries, sample Sicilian specialties at cosy Trattoria da Pippo, or sip on locally-made wine in Trabuxu Wine Bar, an underground restaurant in a 400-year-old stone vaulted cellar.

If Malta could be described as the the Order of St. John’s playground, an entire country where it could display its wealth and cultivation, then Valletta was its crowning glory.

And, to this day, the largest gem in that crown is St. John’s Co-cathedral.

A pristine and perfectly preserved example of Baroque architecture, its austere facade was designed to intentionally conceal the treasures within.

Commissioned by Grand Master Jean de la Cassiere and designed by Maltese architect Girolamo Cassar, the ornate walls were carved by local craftsmen and decorated with gold leaf. Every inch of the cathedral, from its polychrome marble floor upwards, is truly jaw-dropping. It’s unquestionably one of the Mediterranean's most noteworthy masterpieces.

The cathedral is also home to not one but two Caravaggio paintings. The story goes that the disgraced artist fled to Malta after committing murder in Rome, producing the ‘Beheading of St. John the Baptist’ to thank the Order for its hospitality in hosting him. Before long, Caravaggio was involved in another brawl and this time fled to nearby Sicily. Just a short walk from the cathedral is Upper Barrakka Gardens, a peaceful respite with a sensational view of the Grand Harbour.

None of the original buildings in Valletta had gardens, so a communal space was built for the knights to relax and generally enjoy being important. It’s a tranquil spot to enjoy a pastizz, a flaky Maltese pastry filled with ricotta cheese that’s eaten for breakfast or as a mid-afternoon snack.

It’s just one of many wonderful people-watching perches where you can sit and soak in the vibrancy of Valletta.

Too much for one trip

If I learned one thing from my trip to Valletta, it’s that it’s a city that deserves several days of exploring. Every building tells a story, every corner has a history. Two, or even three days, in the city are simply not enough.

Valletta has gained popularity since it was named Capital of Culture 2018 but there’s still time to discover it before the rest of the world does. Start planning your trip to Valletta now.

This article was produced by The Local Creative Studio and sponsored by Malta Tourism.