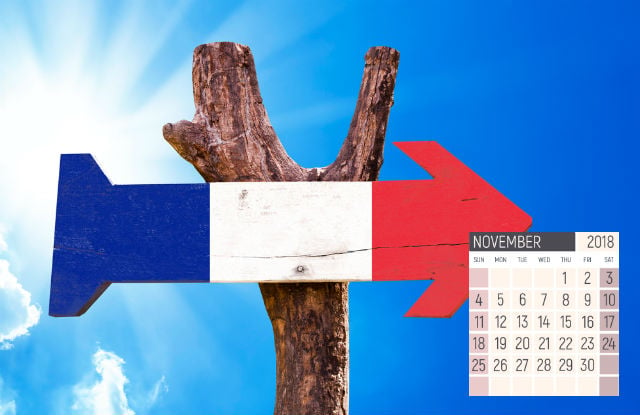 French President Emmanuel Macron is heading to Belgium on Monday for a two-day visit.

This is a rare state visit that it is hoped will cement strong relations between the two countries at a time when the European Union is going through a turbulent period due to the rise of populism across the bloc.

Meanwhile French MPs will debate the proposed justice reforms which are intended to allow the institution to “strengthen and adapt” but which have received criticism from judges and lawyers in France.

And the “yellow vest” fuel tax protests around France continued into a third day on Monday with road blocks set up at petrol refineries and at strategic points on roads and motorways across the country. CLICK HERE for the latest. Tuesday November 20th
Tuesday marks the beginning of the 101st Congress of Mayors in Paris.
Somewhat controversially Macron will be absent from this year's event, which comes at a time when mayors in France have just about had enough, with half of them saying that they would not be running for re-election in 2020.
There will also be a national strike of employees working for France's national unemployment agency the Pole Emploi over job cuts on Tuesday.
And on top of that, France's nurses will be taking to the streets “to defend a quality healthcare system”.
Tuesday is also set to see the first snow of the season in Paris and the greater Ile-de-France region, according to France's national weather agency Meteo France. Wednesday November 21st
The League against Cancer is launching its first assembly for cancer prevention on Wednesday, with France's Health Minister Agnes Buzyn set to attend.
The event will feature a debate on what France's cancer prevention policy should be over the coming years.
The Force Ouvriere trade union is set to elect a new leader on Wednesday amid a scandal over expenses.
French auction house Artcurial has a rather unusual sale on Wednesday, with two dinosaurs — an Allosaurus and Camptosarus — set to go under the hammer.
Thursday November 22nd
The Champs-Elysees Christmas lights will be switched on in Paris on Thursday and this year it will be French fashion legend Karl Lagerfeld who will be doing the honours. Photo: AFP
Friday November 23rd
And following hot on the heels of the French capital, the famous Strasbourg Christmas market will open in eastern France.
This is the oldest “marché de Noël” in France, dating back to the 16th century. Set in the quaint, medieval old town, it has 300 stalls, making it one of the largest markets in Europe. The heart of the festivities is Place de la Cathédrale, in front of the gothic cathedral.
Christmas Market Colmar – November 23rd to December 30th
And the Christmas market in the picturesque town of Colmar in the Alsace region kicks off in late-November. Wandering around the illuminated city, trying out Alsatian specialities, and sipping from a mug of mulled wine will definitely get you into the Christmas spirit.
An exhibition looking at pop legend Michael Jackson's “huge impact” on contemporary art will open at the Grand Palais in Paris on Friday.
“Michael Jackson: On the Wall”  will tell the “untold story” of how the king of pop became “one of the most influential figures in art of the last half century”, inspiring artists from Andy Warhol to David LaChapelle and Grayson Perry.

Image: Grand Palais
Saturday November 24th
Marches against violence against women will be held across France on Saturday in response to a call from women's right collective NousToutes.
A report released last year revealed that a woman dies at the hands of her live-in partner every three days in France and hundreds of thousands of women are victims of abuse by their partner in every year.
There are also more planned “yellow vest” protests on Saturday. Organisers are calling on their followers to descend on Paris. It is unclear at this stage what is planned but perhaps be prepared to leave your car behind on Saturday if you are in the Paris region.
Sunday November 25th
On Sunday an extraordinary summit will be held in Brussels with the goal of finalising the Brexit deal and while this isn't technically taking place in France it's certainly an event Brits living in France will want to keep an eye on.