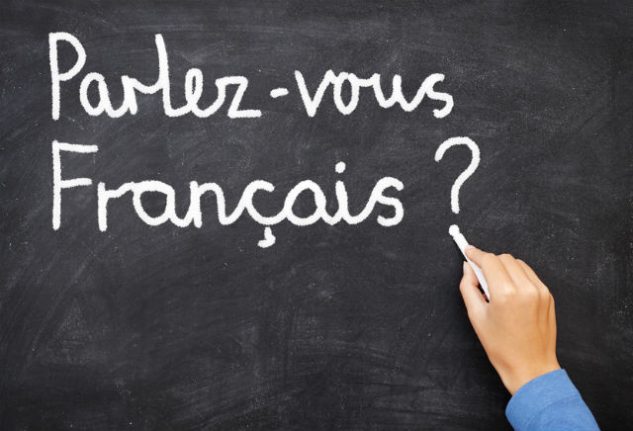 photography33/Depositphotos
Some of these words can be used on a frequent basis while some are useful because they express something unique that doesn’t exist in quite the same way in English.
But one thing they all have in common is that they're really, really fun to say.
The following are some of the weirdest-sounding, most entertaining, tongue-twisting French words that we could find.
1. Abracadabrantesque Why do I need to know abracadabrantesque?

Most of the time spent learning a language is dedicated to learning the essentials but this word is all about having some fun with French.

It might not surprise you to find out that it's an adaptation of the word 'abracadabra' which means the same in French as it does in English and it is also an extended version of the more common French word abracadabrant which means 'bizarre', 'weird', 'startling', 'confounding' and 'bewildering'.

The invention of abracadabrantesque has been attributed to French poet Arthur Rimbaud however some sources say it was first seen in a novel called Les Vagabonds by French writer Mario Proth in 1865.

Nevertheless, it's former French president Jacques Chirac who is credited with popularising the word after using it in a TV interview in 2000.

The final result is preposterous.

The accused made up a ludicrous story in the court. Why do I need to know blablater?

This is a great and original word to use, which will impress your French hosts and really get your point across.

So, what does blablater mean?

Blablater means 'to babble', 'to prattle', 'to waffle on' or if you're feeling harsh 'to talk shit'.

If used in a slightly more positive tone, it can also mean 'chit chat' and 'small talk'.

It probably won't surprise you to find out that blablater comes from the noun blabla which means the same in French as it does in English so 'to blather' or 'to prattle'.

It probably makes you think of France's ride-sharing firm “Blablacar” which has a system where users can signal how much they like to waffle on in car journeys in order to be paired up with drivers who also like to prattle on.

It might sound odd but it is a real word and even has a place in the French dictionary so you don't need to hesitate overusing it in everyday life.

It isn't a word that is used a huge amount by the French so they will certainly impressed if you know it.

But if you think saying the infinitive blablater is tough enough, just try conjugating it (see some examples below).

Will you be prattling on for the whole week?

I do not babble in order to create long sentences.

Once again, Minister Lamrock has proved that he is good at warbling on, but when it comes to action, forget about it,” commented Dubé.

(The above example is from linguee.fr) Why do I need to know rocambolesque?

This is a fun word to say and a great way to give your French conversation some panache when you want to express disbelief about something.

Rocambolesque means “incredible” and “extraordinary” and is used to describe something improbable.

For example, a rocambolesque story is one that is full of twists and extraordinary adventures.

The word rocambolesque has become common in French and other languages, including English, to label any kind of fantastic adventure.

Other words in French that get the same meaning across are bizarre or extravagant.

An utterly incredible and as yet unexplained event.

Whenever somebody rattles off some wild assertion, he just says: “Name me two!

(The above examples comes from linguee.fr) Why do I need to know hurluberlu?

As well as being fun to say, hurluberlu is a useful word that you can use to describe people.

Although no one knows exactly where the noun hurluberlu comes from, it does appear in works by 16th-century writer François Rabelais, who was known for his creative use of words and even sometimes for just making them up.

Some also think it might be related to the English ‘hurly-burly’ (defined as ‘busy’ or ‘boisterous’), although the two words have completely different meanings.

Fittingly for a weird-sounding word, un hurluberlu is a way to describe a ‘weirdo’, an ‘eccentric’ or an ‘oddball’.

You might hear someone say Quel hurluberlu! (What a weirdo!) about someone they have seen or met.

Obviously, there’s no polite way to describe someone as an oddball, and calling someone un hurluberlu isn’t exactly a compliment, so it’s probably best to wait until the hurluberlu you want to describe is out of earshot.

Depending on the gender of the person you want to describe hurluberlu can be spelled without an 'e' for male eccentrics (un hurluberlu) or with an 'e' (une hurluberlue) for female oddballs.

A good alternative is un type bizarre or une excentrique.

How do I use hurluberlu?

Colette is absentminded, a scatterbrain, basically an oddball.

Her boyfriend is a bit of a weirdo; Her parents are worried.

(The above examples are from wordreference.com) Why do I need to know raplapla?

You can use this funny sounding French word to describe old objects, bread, your hair or even yourself, on a bad day.

Raplapla is an informal adjective that means ‘worn out’, ‘tired’ or ‘flat’.

It’s thought to have evolved from either the expression être à plat, meaning ‘to be tired’, or replati, the past tense of the verb replatir, meaning ‘to level’ or ‘flatten out’.

As this word is an adjective, it’s often used with the verb être, meaning ‘to be’, for example, je suis raplapla (I am worn out).

But it is also commonly used with the verb sentir, meaning ‘to feel’, for example, il se sent tout raplapla aujourd’hui (he feels completely exhausted today.)

Raplapla can be used to describe things as well as people.

In this case, it’s normally used for something old and worn out, such as le matelas est tout raplapla (the mattress is all sunken.)

Or you could also use it to describe something that is a bit flat and lifeless, for example, mes cheveux sont raplaplas (my hair is flat and tired looking).

Some alternatives for raplapla, which are less enjoyable to say, include épuisé (exhausted) and sans énergie (without energy).

How can I use it?

I feel completely worn out.

Bread made only with chestnut flour could turn out flat because it’s gluten-free.

(The examples above come from wordreference.com)