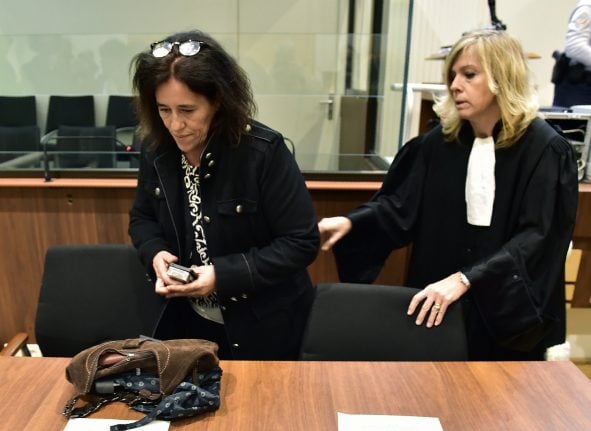 Rosa Maria Da Cruz, a mother of four originally from Portugal, kept her daughter Serena hidden away until she was nearly two.

Her lawyers said she had never accepted falling pregnant again.

In 2013, a mechanic discovered the infant in the filthy boot of Da Cruz's car when she took it to be repaired.

Hearing a noise, he opened the trunk to discover the baby in a car seat, naked, filthy and dehydrated. She was surrounded by maggots and excrement.

The infant was also kept in an unused room at the family home in the Correze region of central France.

After a week-long jury trial a court in town of Tulle sentenced Da Cruz to a five-year jail term, three years of which were suspended, and ordered that she be monitored by social services for five years and receive psychiatric treatment.

She was jailed on Friday evening in a prison in the central city of Limoges but was given leave to apply for early parole.

The case of the “baby in the boot” caused horror in France.

Serena, who turns seven next week and is in foster care, suffers from severe mental impairments, including irreversible autism, which medical experts have linked to sensory deprivation during her early months.

On Friday Da Cruz, who had faced up to 20 years imprisonment, asked her daughter's forgiveness.

“I realise I hurt her a lot and that I will never again see my little girl,” she said.

Da Cruz's partner Domingos Sampaio Alves, an unemployed bricklayer, insisted he had no idea his partner had given birth to another child.

“I don't know why she did this,” he told the court, describing her as “a good mother” to their other children, who are aged nine, 14 and 15.

She and Alves were allowed to keep their three older children, whom a paediatrician described in court as having been “perfectly raised”.

“You could see she had been a good mother, and we could not understand why Serena had not received the same quality of care at home,” the doctor said.

Da Cruz's lawyers had argued that she was in denial of her pregnancy and, later, of Serena's existence, and asked the court not to jail “a woman who is suffering”.

During the trial it emerged that she had had initially hidden the pregnancies of two of her other children from her partner, not wanting to face reality.

The prosecution had insisted the case was one of wilful neglect, saying Da Cruz's elaborate cover-up deprived Serena of adequate care and food, as well as contact with the outside world and childhood stimulation.

Judge Gilles Fonrouge said that while the child was now in good physical health, she was “closed off to interactions around her”.