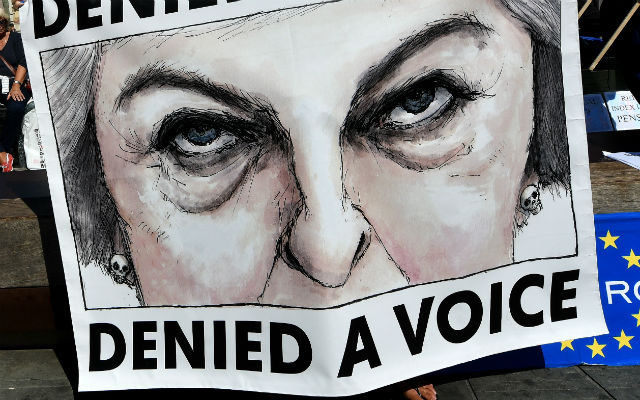 While the infighting and chaos within Theresa May's Conservative party has understandably dominated the media coverage of the draft Brexit deal in recent days little has been said about the section of the population considered among those most affected by Britain's seemingly unceremonious departure from the EU.

Three million EU citizens in the UK and 1.2 million Britons in the EU, including around 150,000 in France have faced over two years of uncertainty and anxiety waiting for the outcome of negotiations and now even after a deal has been reached between negotiators in London and Brussels they are still in limbo.

Some of those Britons living in France told The Local on Friday that the draft deal, even though it guarantees their rights to live and stay in France, offers little reassurance and it even strips them and their children of a key right.

Jason Carter said: “We are still in the same position at this stage as nothing is concrete yet.”

“It is not a relief that there is a deal on the table as it shouldn’t have to be there in the first place. I am not reassured at all.”

“Britons in the EU are still being are neglected. We should have been considered from the start and not just as a result of how EU nationals in Britain will be treated. We are not a bargaining tool. We are human beings who are entitled to choose where we live on previous agreements.”

Mary Guyver said: “I am not reassured at all. We've been swept under the carpet and used as bargaining chips.”

While some Britons admitted relief on a personal level that a deal was on the table given it guarantees they can continue to rely on important rights such as reciprocal healthcare, the string of government resignations and the likelihood that a deal will be rejected in the British parliament means the stress and anxiety they have lived through will only be heightened over the coming weeks.

If there is a no-deal then Brits in Franc must rely on the French government taking steps to guarantee their status, although Paris has already said that will all depend on London acting to protect French citizens in the UK

“Looking at the hostile environment in the UK at present , it doesn't bode well , our rights should have been ring fenced right from the start,” said Mary Guyver.

And the worry is taking its toll.

“There's a low grade anxiety always just under the surface,” she said. “I burst into tears during a phone call with my daughter in the UK when Brexit came up. I just couldn't keep the lid on any longer.”

Others talk of having to switch off from reading and hearing about Brexit such was the worry.

Given the limbo of the last two and a half years many Britons have made their own moves to guarantee their futures rather than leave their lives resting on the strained shoulders of the negotiators in Brussels.

“The only things that have provided any feelings of security until the deal survives any attacks is the steps we have taken as a family to become French,” said Ian Proudfoot.

While the number of Brits applying for French nationality have soared, thousands more UK citizens in France are following advice from the Interior Ministry in Paris and applying for a EU residency permit, which in theory and in the words of the withdrawal agreement they will be able to exchange for whatever residency card the French introduce after Brexit.

But following the application process whether for nationality or a carte de séjour residency permit can simply add to the anxiety.

There have already been reports of people being turned down for a carte de séjour and being asked to leave France within 30 days.

Others who have been turned down because they can't prove they have sufficient income to make them self-sufficient in the eyes of the state – even though they have been here for years – are having to take their cases to the EU or pay for lawyers to help them with their appeals.

While others, particularly elderly British residents in France are simply too scared to apply.

“Several elderly people I know who have been here many years are simply too frightened to apply and are sticking their heads in the sand hoping it will be all right on the night,” said Mik Bennett.

A lot of the anger among Brits living in the EU which has been reflected by campaign groups such as British in Europe and Remain in France Together is how both sides tried to give the impression their had delivered on citizens rights.

Michel Barnier the EU's chief negotiator stressed how EU citizens in the UK and the Britons in France could go on living their lives as before.

Yet many won't be able to because they ave been denied the right to onward freedom of movement.

British in Europe's Jane Golding summed up the significance in this column.

“80 per cent of us are working age or younger and many rely on it for work and family.”

“For Helen, a caterer in the French Alps, losing it means she and her husband won’t be able to work in other EU countries at short notice which is what they do now during the summer months. They will only be able to work and have their catering qualifications recognised in France, which means they will lose almost half their annual income and won’t be able to replace it easily.”

Jason Carter said: “Onward freedom of movement is very important. We should have a right to move where we wish within member states as this was a historical right agreed when we first entered the EU.”

While others pointed out it would be their children who will really lose out without the right to settle in another country other than France.

There is still hope however that this loss can be rectified at a later date although hopes are not high given campaigners have been demanding it for two years already.

Although there were some positive voices out there.

Given the potential for chaos in the UK, some are just thankful they are living on this side of the Channel.

“Living in France, even with a wobbly prospect, at least there will be food in the supermarkets and medicine in the pharmacy,” said Rowland Par.