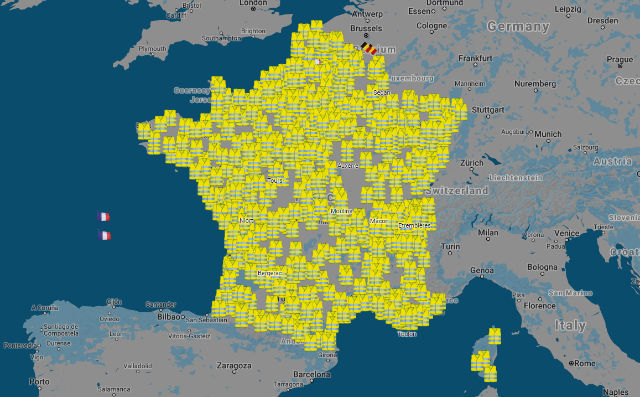 Photo: Screengrab/blocage17novembre
Increasingly it looks like November 17th might be a day to avoid hitting the road in France altogether.
Below is a map that shows where the planned protests will be although there are likely to b ones that are not on the map as organisers hope to cause as much disruption as possible (see link below).
How the 'yellow vests' are planning to block France's roads on Saturday A new motorists protest movement in France — that has been dubbed the 'yellow vests' (gilets jaunes) — are hoping to force the government to lower the prices of fuel which have been rising steadily over the past few months.
And in order to achieve this, the gilets jaunes, named after the high-visibility vests that French motorists have to carry in their cars – are calling for the blocking of roads and highways in France and Belgium on Saturday November 17th.
However the fuel protests are about more than just the price of petrol and can be seen as part of a longstanding friction in France between the capital and the countryside.
READ ALSO: Why France's high-vis drivers' rebellion is about more than just fuel prices
This week French Interior Minister Christophe Castaner said the protest movement was “irrational” and vowed that police would intervene if road blockages prevented emergency services from being able to get through.
“We will not tolerate any total blockages,” said Castaner.
A map (see below) for those who want to take part in the movement, produced by website blocage17novembre, shows exactly where in France angry motorists are planning action, with the protest locations appropriately marked by the yellow vest icons.
To see your area in more detail, you can zoom in on the map.
It also comes in handy for anyone planning to take to the road that day so that they know where to avoid… and if the map is anything to go by that includes a lot of places.
Although it's worth noting that the situation could still change an there may be less or even more road blocks than those included on the map.
READ ALSO:
The movement which first developed after angry posts on social media has grown out of anger at the price of diesel and petrol which have risen in the last year by 23 percent and 15 percent respectively.
But so far the threats have failed to move the French government too much, with French President Emmanuel Macron standing firm on Monday.
“I fully back the plan to bring the level of taxation on diesel up to a level with petrol. I prefer to tax fuel to than to tax workers,” said the president.
However he has also suggested that there could be state aid available for those who have to travel more than 30 km per day by car.
“The Hauts-de-France region has offered transport assistance for those who have more than 30 km per day of travel, and I asked the government to see how we can support this,” Macron said.
Meanwhile, certain French supermarkets are trying to ease the burden on drivers' wallets by cutting the price of petrol and diesel.