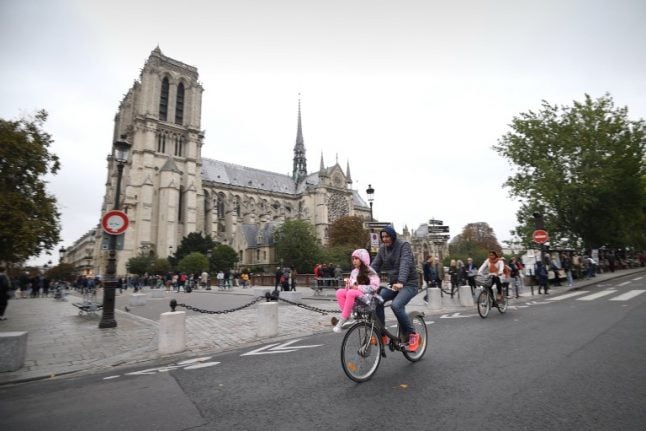 Photo: Eric Feferberg, AFP
Paris mayor Anne Hidalgo's plan, which she disclosed Wednesday, is to ban most motorised vehicles Paris' historic city centre.
The proposed area would span over the city's first four arrondissements, which are all huddled around the city centre on the right bank of the river Seine. It's a part of Paris loved by tourists and which houses some of the capital's most famous landmarks including the Louvre, Notre-Dame cathedral and the Pompidou museum.
Although City Hall hasn't given away much detail about the plan, the idea would be to restrict almost all traffic in the area, and introduce electric shuttles for people to get around.
Whether or not it will actually happen, the proposal, which will be presented at the next municipal council meeting in each of the four districts, is likely to draw both support and criticism alike.
READ ALSO:
Paris mayor mulls plan to ban cars from historic centre* Supporters include mayors from the districts involved and also the locals, Hidalgo believes.
The idea for the car free zone follows on from a plan, that was confirmed last month, to merge the four central arrondissements (1st, 2nd, 3rd and 4th) into one united administrative district. The new arrondissement will be a called Paris Centre. “The mayors of the 4th and 3rd arrondissments suggested that the heart of Paris should be pedestrianised and to link up the four arrondissments with driverless shuttles. I decided to look into this proposal,” Hidalgo told AFP. “There is a lot of support from the locals.”
Take a walk along the car-free promenade along the right bank of the Seine any weekend when it is filled with people walking or cycling and it's obvious many Parisians might welcome less cars in the city.
But Hidalgo's car-restricting measures (as well as her style which is sometimes perceived as being authoritarian) have also come up against fierce opposition and her latest idea is likely to make many critics see red.
Pierre Chasseray, head of the French motorists assiciation 40 millions d'automobilistes, is as might be expected furious about Hidalgo's proposal.
“This has become a psychiatric problem, it just doesn't stop. Hidalgo can't wake up the morning without coming up with another way to bring down cars,” Chasseray  told The Local.
“This is a project that is only meant for Paris 'bobos' (bourgeois-bohemian) and it's 'anti-banlieues' (the poorer Paris suburbs). Of course we're not against having less cars in the city, but you can't force it onto people, you have to let them get around,” he said.
Chasseray said that he welcomed attempts to reduce cars in Paris, but that the proper infrastructure – such as free car parks on the outskirts of Paris, and safer public transport, had to be put in place before drivers would give up their cars.
'Hidalgo only thinks about the centre of Paris'
Others say that this measure is elitist, and will only contribute to pushing people out of Paris.
“This beautiful city, which is among the richest and most famous in the world, is closing in on itself by being taken over for the behalf of a small population which believes it is green,” tweeted Dominique Reynié, university professor at Science-Po in Paris.
Hidalgo's political opponents are also predictably sceptical.
“Anne Hidalgo only thinks about the centre of Paris, her 'museum' Paris. I think about the poorer everyday Parisians, who live along the périphérique,” right-winger Valérie Pécresse, president of the wider Paris region told LCI.
Pécresse said she was looking at other solutions to cut down pollution instead, such as covering the congested périphérique ring road.
Along with other right-wing politicians, Pécresse had opposed Hidalgo's policy of turning the road next to the River Seine into a car-free promenade, which a court ruled in favour of earlier this month after several legal challenges.
But even members of Hidalgo's own party, the Parti Socialiste (PS), have warned that banning cars from the city centre would have to be done gradually.
'Banning cars can only be done gradually'
The mayors of two of the arrondissements involved, both from the PS, told Le Parisien that such a scheme would take time to implement, and that other forms of transport would have to be introduced.
“It's essential to make sure shops and businesses can continue to operate normally and that our districts remain lively. We have to do this step by step,” said Pierre Aidenbaum, mayor of Paris' third arrondissement.
His colleague from the fourth arrondissement nearby agrees.
“I am in favour of an intelligent form of pedestrianisation with a gradual slowing down of the traffic, without stopping people who live in these areas from using their cars. The priority is to fight against traffic that is just passing through and big delivery vehicles. But this needs to be done gradually,” said Ariel Weil, mayor of the fourth arrondissement.
Anne Hidalgo's idea to make central Paris car-free does not come as a surprise.
Since the beginning of her tenure in 2014, she has introduced a raft of green measures in the French capital to fight pollution.
Other than the car-free promenade along the Seine, they include banning the most polluting older cars from the city and reducing traffic when air pollution levels are high. She has also promised to ban diesel vehicles in Paris by 2020.
The socialist mayor also introduced and a car-free scheme known in French as “Paris respire” or “Paris breathes”, which sees certain districts pedestrianised on the first Sunday of each month. She hopes it can be extended to every Sunday by 2019.
But whatever happens, Paris isn't about to ban cars in its centre for good anytime soon.
For a start, Anne Hidalgo would first have to win the next election in 2020 when her job is next up for grabs, and for now, the embattled socialist mayor hasn't yet said if she'll be a candidate next time round.
by Emilie King