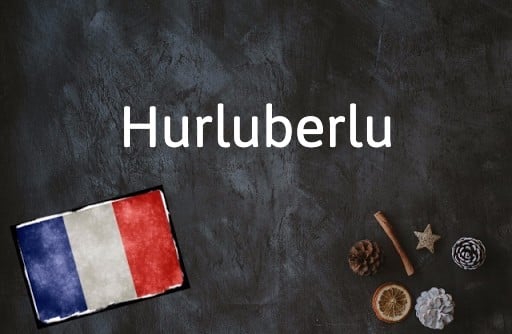 Why do I need to know hurluberlu?

As well as being fun to say, hurluberlu is a useful word that you can use to describe people.

Hurluberlu – roughly pronounced urr-loob-err-lu – looks like a random mix of letters that make little sense. Fittingly for a weird-sounding word, un hurluberlu is a way to describe a ‘weirdo’, an ‘eccentric’ or an ‘oddball’.

Although no one knows exactly where the noun hurluberlu comes from, it does appear in works by 16th century writer François Rabelais, who was known for his creative use of words and even sometimes for just making them up.

Some also think it might be related to the English ‘hurly-burly’ (defined as ‘busy’ or ‘boisterous’), although the two words have completely different meanings.

You might hear someone say Quel hurluberlu! (What a weirdo!) about someone they have seen or met.

Obviously, there’s no polite way to describe someone as an oddball, and calling someone un hurluberlu isn’t exactly a compliment, so it’s probably best to wait until the hurluberlu you want to describe is out of earshot, however the word itself is not vulgar or offensive.

Depending on the gender of the person you want to describe hurluberlu can be spelled without an ‘e’ for male eccentrics (un hurluberlu) or with an ‘e’ (une hurluberlue) for female oddballs.

A good alternative is un type bizarre or une excentrique.

Son copain est un hurluberlu, et à cause de ça ses parents sont inquiets. — Her boyfriend is strange, and because of that her parents are worried.