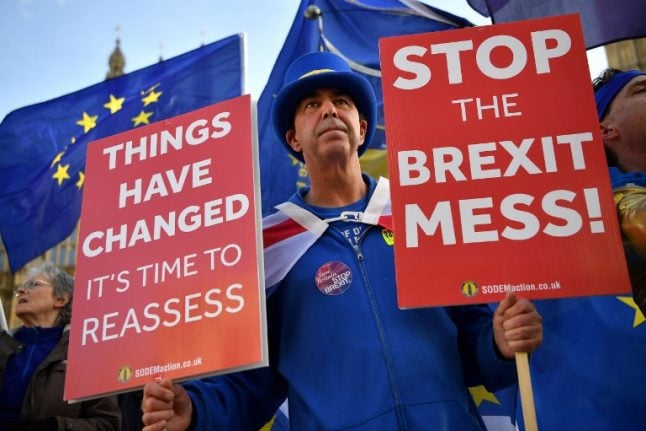 Theresa May told parliament and members of her government on Wednesday that the Brexit deal agreed with Brussels was the best possible agreement for the UK to leave the EU and one that delivers on the result of the referendum in 2016.

Her deal was however attacked by both leavers and remainers and it remains highly doubtful that the agreement would win the necessary support in her cabinet and then the British parliament before it can be signed and sealed.

The agreement certainly hasn't won any support among campaign groups representing the 1.2 million British citizens living across the EU.

“Claims by the British government that 'they have delivered on citizens' rights' are entirely false,” Brian Robinson from the Brexpats Hear our Voice campaign group told The Local.
“The draft agreement only touches upon some treaty rights, and ignores the rest.”
The citizens' rights aspect of the bill was agreed back in March and the EU Commission confirmed to The Local on Wednesday that nothing has changed since then.
“The citizens’ rights part of the Withdrawal Agreement was agreed in full back in March,” the spokesman said.
That means that while Brits will be allowed to stay, work and receive healthcare in the EU countries where they live they will be lose their current right to onward freedom of movement – in other words the right to move to another EU country.
READ ALSO: More holes than cheese: A recap of what Theresa May's Brexit deal means for Brits in Europe That means that while Brits will be allowed to stay, work and receive healthcare in the EU countries where they live they will be lose their current right to onward freedom of movement – in other words the right to move to another EU country.

This is a big deal for many people whose livelihoods depend on being able to work in an EU country other than their country of residence.

“Onward freedom of movement has not yet been agreed, and many UK citizens in the EU rely on this for their livelihood,” said Robinson.
The umbrella group British in Europe have long called for onward freedom of movement to be guaranteed for Brits in the EU and while they have won support in the European Parliament, their requests have fallen on deaf ears among those negotiating the deal in Brussels and London.

British in Europe's chair Jane Golding told The Local: “If this draft agreement is agreed and becomes legally binding then it will only confirm the current rights we have in one country.

“But most of us moved on the assumption that those rights were valid across the EU27. Some of us have lived in several countries.”

Kalba Meadows from the Remain in France Together group said even if freedom of movement is guaranteed at a later date it would be too late for many Brits in Europe.

“If the crucial issue of free movement will be omitted it will become the subject of the 'future relationship' negotiations along with a million and one other issues – and too late to avoid serious disruption to the lives of many Brits in Europe,” she told The Local.

While freedom of movement was the main omission from the Brexit deal, campaigners were also unhappy about other rights that were not included in the March agreement.

They cover matters such as the right to provide cross-border services as self-employed people, recognition of some professional qualifications and the right to be joined by a future spouse or partner who you were not in a relationship with before the end of the transition period.

One of the major downsides of the deal is that EU countries may adopt a “constitutive system” meaning Brits would have to apply and prove their status in a country rather than just being granted it. The worry is that some expats who have been settled in a country for a years won't meet the criteria around minimum income.

But perhaps the main bone of contention campaigners have with the Brexit deal is that citizens rights have not been ring-fenced, meaning if Theresa May's much criticized bill fails to get through and the UK lurches towards a no-deal then suddenly Brits in Europe lose everything.

Remain in France Together's Kalba Meadows stressed that there was a long way to go before Brits in Europe and EU citizens in the UK can rest easy.

“There's no doubt that for citizens' rights a deal is better than no deal, so there are five million people today with their hearts in their mouths. But even if the deal is accepted by the cabinet there's a long way to go … it still has to get though the UK and European parliaments, so nobody can start counting chickens just yet,” she said.

The hope of all these groups is that Theresa May relents and accepts the growing demand for a “people's vote” on the final deal that would include an option to remain in the EU.