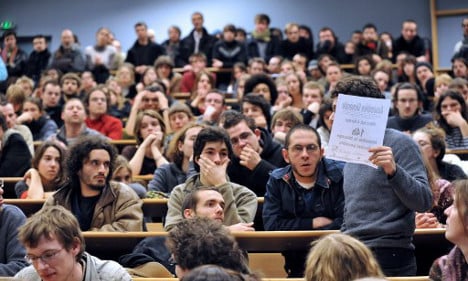 Photo: AFP
France is the fourth most popular country in the world for international students, with thousands of Americans, Brits and Australians coming here to study every year.
Nevertheless, the number of foreign students in France, which sits at the 343,000 mark, dropped by 8.1 percent between 2010 and 2015.
And even though these figures have improved in recent years, French Prime Minister Edouard Philippe is preparing to announce a series of measures in a bid to make French universities more attractive attractive to international students.
France has made efforts in recent years to attract more students, notably allowing more courses to be taught in English at universities.
But the French government believes that the possible negative impact of Brexit on the UK and the anti-immigration agenda of American president Donald Trump means the conditions are favourable for France to steal a march on its rivals.
READ ALSO: France will simplify its visa procedure to enable international students to get the relevant permit to study in France.

Tuition fees
The French government plans to reform tuition fees in French universities for students outside of the European Union who account for about 100,000 of the foreign students currently in France.
Scholarships
At the same time, scholarship programs “will be considerably strengthened” although so far there have been no details on how this will be done.
Students from within the EU will continue to pay the same fees as French students, in accordance with European ruled and the government also plans to simplify the procedures for obtaining a student visa. More French campuses abroad
France also plans to increase the number of campuses its universities have abroad just like the Franco-Tunisian University of Africa and the Mediterranean (UFTAM) announced by French President Emmanuel Macron which will start courses in 2019-2020.
France continues to attract a large majority of African students but hopes that by growing its representation abroad it will be able to attract students from other places around the world, including Asia.
The government wants to increase the number of courses taught in English.
According to the most recent statistics published by Campus France, an online portal run by the French government of the roughly five million international students in the world in 2018, 343,000 of them studied in France.
With nearly 7 percent of the total, France ranks behind the United States, United Kingdom and Australia but remains first in terms of non-English speaking destinations.
However it faces fierce and growing competition for its spot with countries such as Germany, Russia, China, Canada and Saudi Arabia.
In fact, a report that came out in May revealed that while France is no longer the “worst for international students” it was Germany that ranked as the best.
According to Campus France, foreign students cost France three billion euros a year but brings in 4.65 billion euros.