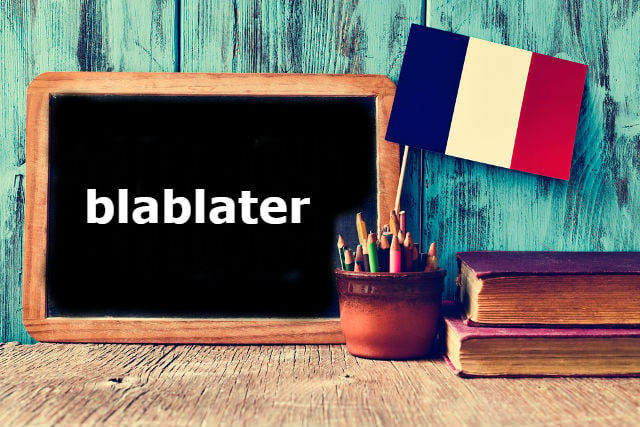 Why do I need to know blablater?

This is a great and original word to use which will impress your French hosts and really get your point across.

So, what does blablater mean?

Blablater means 'to babble', 'to prattle', 'to waffle on' or if you're feeling harsh 'to talk shit'.

If used in a slightly more positive tone, it can also mean 'chit chat' and 'small talk'.

It probably won't surprise you to find out that blablater comes from the noun blabla which means the same in French as it does in English so 'to blather' or 'to prattle'.

It probably makes you think of France's ride-sharing firm “Blablacar” which has a system where users can signal how much they like to waffle on in car journeys in order to be paired up with drivers who also like to prattle on.

It might sound odd but it is a real word and even has a place in the French dictionary so you don't need to hesitate over using it in everyday life.

It isn't a word that is used a huge amount by the French so they will certainly impressed if you know it.

But if you think saying the infinitive blablater is tough enough, just try conjugating it (see some examples below).

Vous blablaterez pour toute la semaine? – Will you be prattling on for the whole week?

Encore une fois, le ministre Lamrock a prouvé qu'il est fort lorsqu'il s'agit de blablater, mais pour les actions, on repassera, remarque Mme Dubé. – Once again, Minister Lamrock has proved that he is a good at warbling on, but when it comes to action, forget about it,” commented Dubé.

(The above example is from linguee.fr)