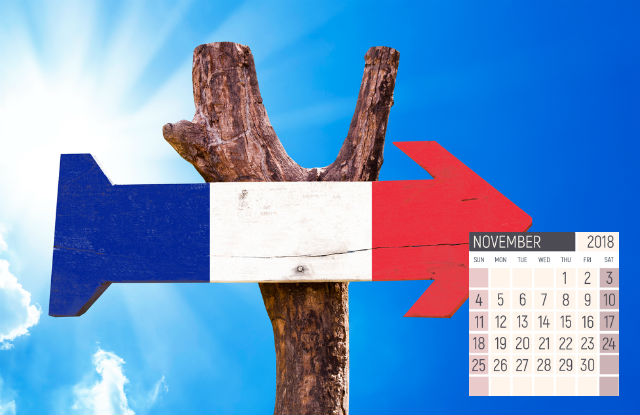 The week begins in France with a strike.

Teachers in primary and secondary schools across France have been called to join a walk-out on Monday in protest over a cut in the number of teaching posts.

All teaching unions have joined the call to strike – the first time they have been united in industrial action since 2011 – and protests are planned in cities across the country with the main one set to take place in Paris at 2pm.

To understand more about what the teachers strike – the first under Macron – is all about then see the link below.

READ ALSO: Why is France getting rid of hundreds of teachers

Monday also sees the start of the trial of the Bekhaled brothers in Paris over their alleged plot to launch a terror attack in Lyon in 2014.

Italian and French transport ministers are expected to meet on Monday to discuss the controversial Lyon to Turin high speed rail link.

Tuesday marks the third anniversary of the Paris terror attacks that left 130 people dead at the Bataclan music hall, the Stade de France and bars and cafes across the city in 2015.

Paris Mayor Anne Hidalgo is due to join a commemorative march in the French capital to remember those who died.

On Tuesday France's far left leader Jean-Luc Melenchon will present a proposition to parliament aimed at creating a parliamentary inquiry into the rise of dangerous far right groups. Last week it emerged a group of extremists had plotted to attack President Emmanuel Macron during the World War One commemorations.

Tuesday will also see the beginning of the trial of notorious French serial killer Michel Fourniret over the killing of a fellow prisoner's wife in 1988.

French cinemas on Wednesday will welcome the release of the new Harry Potter prequel – “Fantastic Beasts – The crimes of Grindelwald”.

Elsewhere on Wednesday an auction house in Geneva is putting some of Marie Antoinette's jewellery under the hammer.

And in Toulouse the association Wimoov is holding an event to look at the challenges of improving transport for elderly people.

It's Beaujolais Nouveau day on Thursday! (Although the celebrations often begin on the Wednesday evening.)

The festivities will be marked by fireworks, music and various parties to celebrate the region's first wine of the season

On Thursday French president Emmanuel Macron heads to Morocco for the opening of the high-speed rail line between Tanger and Casablanca.

Thursday is also the last day in the trial of UBS bank over its alleged system of tax fraud.

In football, France play Holland in the last match of the Nations League in Rotterdam.

Saturday could be one of the biggest days of protest against President Emmanuel Macron and his government since he was elected in May 2017.

Motorists across France, united under the protest movement that has been dubbed the “yellow vests” after the high-visibility jackets French drivers are obliged to keep in their cars, will hold go-slows and set up road blocks around the country to protest over increased petrol prices.

This MAP gives you an idea of where in France the road blocks are planned, but in general it might be a day to avoid getting in the car. Sunday sees the opening of the new Apple store on the famous Champs-Elysées avenue in Paris. The shop will be the biggest Apple store in France.

French president Emmanuel Macron heads to Berlin on Sunday where he will speak to the German parliament.