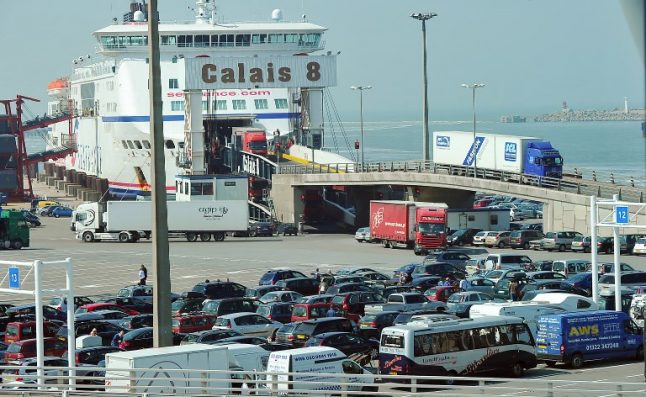 Photo: AFP
The northern French region of Hauts-de-France, the closest on the mainland Europe to the UK, fears potential gridlock at transit points regardless of the outcome of Brexit negotiations.
As talks appear at an impasse, fears mount that the four million lorries carrying goods from across Europe to the UK at ports in northern France will also grind to a halt once Britain leaves the EU, especially if there is no deal before Brexit Day on March 29th.
Xavier Bertrand, the president of the Hauts de France region summed up the potential crisis facing northern France.
“Today the Irish question is hugely sensitive issue for the British. But from an economic point of view, there are ten times fewer trucks on the border between Ireland and United Kingdom than on the border between Hauts-de-France and the UK: the ratio is between 400,000 and 4 million,” he said.
Calais, Boulogne-sur-Mer and Dunkirk make up France’s largest passenger port, its biggest fishing port and its number three cargo hub respectively.
All three are in Hauts-de-France, around 10 percent of whose exports head to the UK and where officials are fretting about the consequences a no-deal Brexit
Regional authorities are working on a “crisis management plan” to try to limit the potential chaos of Britain leaving the EU on March 29th.
But the dilemma for officials is that the region, France’s second most important for logistics after the greater Paris region of Île-de-France, cannot make extensive contingency plans until the outcome of the negotiations on Brexit and the future trade relationship between the UK and the EU is finalized. (The Eurotunnel terminal at Calais. AFP)
That may not be until December.
“We’re not going to spend hundreds of millions on new infrastructure if negotiations turn out okay,” Jean-Paul Mulot, Hauts-de-France’s permanent representative to the UK, told The Local.
Goods from Germany, France, Spain, Italy and the EU’s other major economies all pass through the French region’s ports or the Eurotunnel rail terminal en route to the UK.
“It’s a much bigger situation than just Hauts-de-France,” Mulot said “The largest number of registered lorries are Polish, Romanian and Bulgarian.”
Britain-bound cargo from the EU transits mainly in Calais and Dunkirk, where local authorities are fretting to meet deadlines for contingency plans to adapt the ports ready for Brexit.
“We are ready to go with pre-built temporary installations, which would cost around €20 million, but permanent structures would cost much more,” said Mulot.
It is unlikely however that Calais will be able to start building such infrastructure until December, meaning some aspects of controls and new administrative sites won't be in place for March 29th, the day the UK is scheduled to officially become a non-EU state.
'We won't close the ports'
If a deal is agreed, a transition phase will effectively extend the departure date until December 2020 and give French officials more time.
“In the case of a no-deal, we will not necessarily be ready, but we will not close the ports,” said Mulot. After all, Hauts-de-France, according to its representative to the UK, has been making contingency plans since before the Brexit referendum.
Six hundred new personnel will be needed in Calais alone in the case of a no-deal Brexit: 200 officers to conduct sanitary checks, 200 new customs officers and 200 new border police.
New technology called Fast Pass which includes facial recognition and “other enhanced features” according to Mulot, could be a potential solution to dramatically reducing queues.

The @EU_Commission must launch a #FastPass pilot experiment at ports and tunnel before the summer 2018. pic.twitter.com/7tFxs8bLRq

Xavier Bertrand the president of the Hauts-de-France region has said a delay of two minutes per vehicle for extra customs checks would lead to 27km tailbacks on roads around major French ports. In other words it would “completely stall the economy”, Bertrand said.
Mulot said many “animal products will of course demand new controls” and that many of these could be done offsite.
But as Bertrand emphasized in a recent interview with The Financial Times: “We cannot compromise with food security.”
“Our main problems are linked to logistics,” said Mulot, perhaps reinforcing the obvious.
Yet the region’s most exposed Brexit sector could also end up being the biggest Brexit winner.
In 2017, Amazon opened its largest facility in France in the city of Amiens in Hauts-de-France. “More companies in logistics could come because of Brexit,” says Mulot.
The Hauts-de-France official says his region does not, however, expect many post-Brexit positives.
“Very honestly, companies relocating from the UK are more likely to relocate to eastern Europe than Hauts-de-France,” says Mulot, citing recent automotive industry investment in Poland (Rolls Royce) and Slovakia (Jaguar Land Rover).
On the contrary, the Hauts-de-France region is banking on its close relationship with industries in the UK’s southeast, as well as its proximity to London, to strengthen ties rather than to compete.
“We play a lot on the vicinity between London and Lille. By train you can be in Lille from London within 75 minutes,” Mulot clarifies. “It’s a cultural relationship that precedes Brexit,” he said. (The city of Lille in Hauts de France. AFP)
In 2017, the Mayor of London’s promotional agency signed an MoU (memorandum of understanding) to build partnerships between Lille and London.
That MoU is set to help companies in both cities strengthen ties, especially in the tech sector, to help startups from both sides of the Channel enter each other’s markets and access funding.
Lille’s promotional agency also opened an office in London “to provide assistance to UK entrepreneurs looking to do business in Lille and the wider Hauts-De-France region.”
“Companies looking to maintain passporting rights could be interested in moving back- office or database operations to Lille to maintain access to the EU market,” Mulot said.
Despite such optimism, obvious Brexit concerns persist for the region.
Brits are the number one visitors to Hauts-de-France, according to Mulot. Most engage in “remembrance tourism,” such as trips to the WW1 battlefields at the Somme.
READ ALSO: The reasons why you should think about moving to northern France Most Brits who live in Hauts-de-France are of working age and employed, according to Insee, France’s national statistics agency.
While campaigners have expressed concerns Brits could be left out to dry if the EU and the UK fail to reach a deal or ring-fence citizenship rights, Mulot finds this unlikely. “I don’t have the feeling that the rights of British citizens living in our region will be a problem. It will resolve itself naturally,” Mulot said.
Mulot, like the president of the region Xavier Bertrand, is more concerned about how the French government is going to support the Hauts-de-France region.
Bertrand has repeatedly stressed that his region needs support to train and recruit veterinarians and agricultural experts, as well subsidies for local affected businesses.
“The government must respond quickly to these very concrete questions, there is very little time, there is urgency.” Bertrand said.