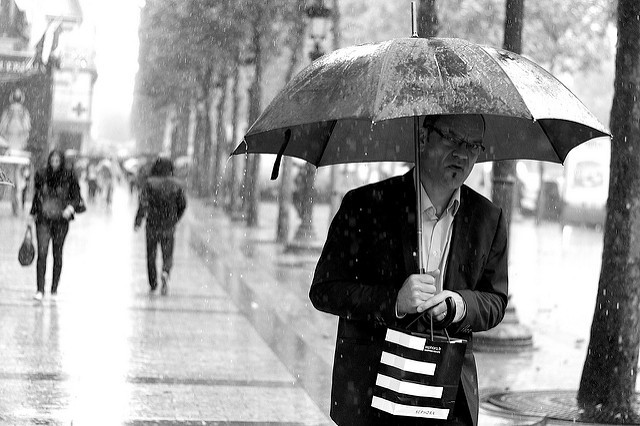 Photo: Luis Jorn/Flickr
It has been established by numerous surveys and polls over the years that the French are a pessimistic bunch.
In fact in 2011 a BVA-Gallup International survey found that despite their relatively high standard of living, the French were the most pessimistic people in the world.
Another survey two years later concluded the French were mired in a “collective depression”.
And several reasons for the perceived gloominess – some of them more contentious than others – have been put forward.
For example, one academic suggested the French were gloomy because hadn’t mastered English well enough while other experts in the field put their alleged downbeat nature down to the way French children are taught in schools.
While others have pointed to the deep-rooted economic crisis after 2008 and a lost sense of French identity in a globalised world.
But is France really a nation of heavy-hearted, morose people struggling to raise a smile and a positive thought in a country that is often the envy of the world?
According to philosopher Frédéric Lenoir the situation is more complex than the polls and surveys would have you believe.
READ ALSO: Photo: AFP
Lenoir believes there is a big difference between of the individual versus the group but that we should never generalize because the French are never completely happy nor are they always unhappy.
“We are a rather happy people, but the paradox is that we are collectively unhappy,” Lenoir told Europe 1. “Individually it’s going OK, albeit with difficult moments. But collectively we are among the most pessimistic people in the world.”
Lenoir says the French suffer from a so-called “collective masochism”, something he laments when “there are many things that could make us proud to be French.”
However Lenoir says that this glumness that many have come to associate with the French has been passed from generation to generation for hundreds of years.
“In France, there is always room for controversy, it is quite symptomatic of our culture, we are a critical people, it comes to us from Descartes and Voltaire, we see what is going wrong rather than what is going well,” he said.
Lenoir believes that this is partly down to the fact that the French are told that “everything is going wrong in our country” when in fact “we are one of the most envied [countries], the most visited, where there are social security laws.”
The glum state of mind that the French are renowned for is apparently particularly evident in the workplace.
According to two French academics from Grenoble School of Management (Grenoble École de Management) Hugues Poissonnier and Pierre-Yves Sanséau it’s partly due to the way the French cling to the idea that it is a “painful curse”.
This attitude, the academics explained, goes back as to the Biblical story of Adam and Eve in which the couple are condemned to a lifetime of work as punishment for their original sin.
And while other nations have adopted a similar attitude to the daily grind, the French are particularly susceptible to this line of thinking. Photo: AFP
“This can be seen in the introduction of the 35 hour week in France, which reveals that the French see work as something that should be limited because it is a constraint.”
Some believe the French can be split along clear line with one group far more likely to be happy than the other.
Denis Gancel, president of W & Cie which carried out the 2013 survey that referred to the French being mired in “collective depression” told The Local that he was most intrigued by a gulf in attitude between two kinds of French person.
“There are there the traders and business people, who are outward-looking and at home in globalization, and they are quite optimistic. Then there are the traditionalist French, who feel disillusioned and pessimistic,” Gancel said.
However the French are far from being all doom and gloom… in fact, according to one survey they’re getting happier.
In March, France was ranked 23rd in the latest World Happiness rankings, far better than its 31st place the previous year.
The report did not go into detail on why the French are feeling happier than before, but it is part of an emerging trend that shows that the Gallic nation may finally be shaking off its reputation for being morose.
According to the study, rather than being a nation of pessimists one in two of them consider themselves to be “happy”, marking the first time since 2013 that 50 percent of French people consider themselves to be “happy”.
And winning the 2018 World Cup helped certainly helped the mood of the country.