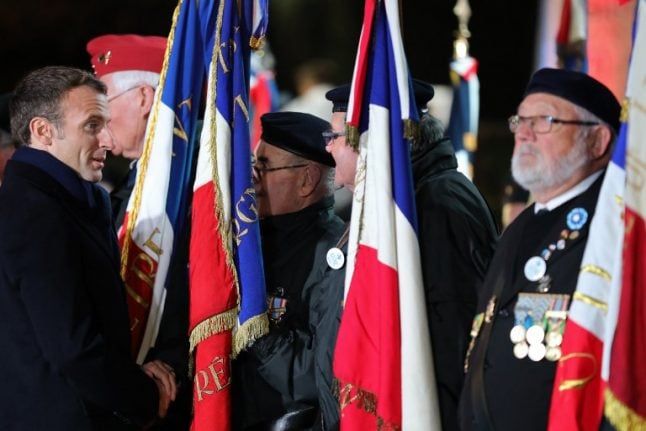 “The attack plot did not seem to have been fully worked out, but the November 11 commemorations appear to have been its background,” one of the sources said.

Five men and one woman, aged 22 to 62, whose phone calls had been monitored, were detained on Tuesday by France's DGSI domestic intelligence agency, which did not release their identities.

The arrests came after one man, living in southeastern France and armed with a knife, travelled to Moselle, eastern France, where he met up with three other suspects. At the time, Macron was touring nearby World War I battlefields and meeting with local people, one source said.

One man was arrested in northern France and the woman in the southeast.

Weapons were found at the homes of the suspects, the sources said.

An inquiry opened by the Paris prosecutor's office, in charge of terrorism investigations across the country, is focusing on “a vague and ill defined
project at this stage,” one of the sources had earlier said.

On Monday, Interior Minister Christophe Castaner warned France remained “on alert” over the threats posed by “extremist networks both on the right and
left, which are quite active in our country”.

It was not the first suspected attempt against Macron.

In July 2017, a 23-year-old was charged with plotting to assassinate the president at France's Bastille Day military parade.

The man told investigators he wanted to kill Macron along with “Muslims, Jews, blacks and homosexuals,” and three kitchen knives were found in his car.

Several other suspected far-right members have been arrested since 2017 — the year Macron was elected president — after police found they might be preparing imminent attacks.

This summer 13 people with links to the radical Action des Forces Operationnelles (Operational Forces Action) group were arrested by anti-terrorist police over an alleged plot to attack Muslims.

Ten people were also arrested in October 2017 over suspicions of wanting to target Muslims as well as politicians like the far-left firebrand Jean-Luc
Melenchon as well as Castaner.

In a report filed by the DGSI as part of that investigation, it said the far right in France consisted of several disparate and competing groups with only “limited” operational capacity.

Left-wing parties and the governing Renaissance group of President Emmanuel Macron announced Tuesday they would boycott a charity game if the far-right National Rally (RN) joins the parliament side.

Even though the RN has historically high representation with 89 seats in the assembly, “that doesn’t mean that we should help them in their desire to normalise themselves,” government spokesman Olivier Veran told CNews television.

Senior Renaissance MP Aurore Berge fretted about the team photo, telling fellow centrist lawmakers: “We are not in the same team. Neither far-right, nor far-left.”

The row underlines a decades-long dilemma for mainstream French politicians over how to deal with the far-right parties of Jean Marie Le Pen and his daughter Marine Le Pen since their emergence in the 1970s.

Some have tried to boycott them entirely, including former president Jacques Chirac, who refused to debate Jean-Marie in 2002 when they faced off in the final round of the presidential election.

She scored 41.4 percent in the second round of April’s presidential election and the party increased its number of seats 10-fold in June’s parliamentary vote.

“It says a lot about these people in reality,” Le Pen told RTL radio on Wednesday about the football row. “It’s hatred all the time,  everywhere, non-stop fighting.”

Veran, an enthusiastic player in previous parliament charity matches, acknowledged his own misgivings about the boycott.

“In saying that I won’t go to play, I am taking part in a phenomenon that serves to reinforce the notion that they (the far-right) are ostracised, that they are victims of the system,” he said.

POLITICS
Biden to host Macron for a state visit at the White House
Url copied to clipboard!