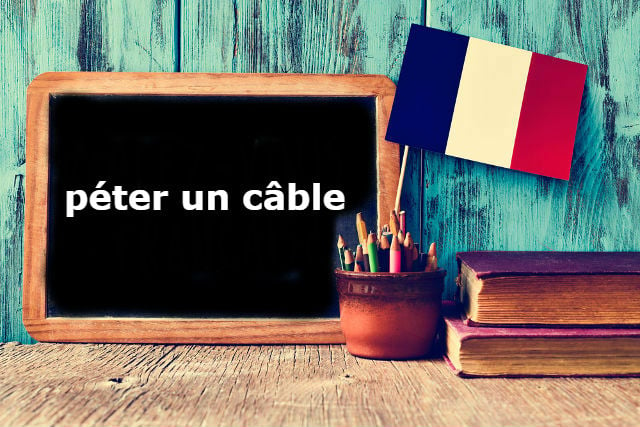 Photo: Depositphotos
Why do I need to know péter un câble?
This expression, frequently heard in morning traffic jams and on overcrowded metro trains can be confusing because it has nothing to do with cables. Or farts.
But it’s a need-to-know expression because you’ll definitely want to get out of the way of someone who is about to péter un cable.
So, what does péter un câble mean?
The word câble has a pretty straightforward translation of, well, ‘cable’ as in ‘rope’ or ‘electrical cord’.
The verb péter is informal, and most often translated as ‘to fart’, but it can also mean to ‘burst’, ‘pop’ or ‘snap’.
So, literally, péter un câble translates as ‘to fart a cable’ or more fittingly here, ‘to burst a cable.’ Figuratively it means that someone is about to get really, really angry in quite a spectacular way.
In other words, they’re about to ‘go ballistic’, ‘berserk’, or ‘lose it’.
If you imagine all the anger building up inside someone until it bursts out in an over the top rage, you get the idea.
You might hear this expression in the future tense like, Si j'arrive en retard aujourd'hui je vais péter un câble! (If I get there late today I’m going to lose it!) in which case you should get out of the way! You could also hear it used in the past tense to describe a reaction, like Il était tellement impoli, j’ai pété un câble! (‘He was so rude, I went ballistic!’)
Alternatives
A common synonym that can be used in the same way is péter un plomb or péter les plombs. Un plomb is ‘a fuse’ in English, so this expression translates quite literally as ‘to blow a fuse.’
The association with passing gas makes both of these expressions informal and not especially polite. If you need a more formal, and slightly milder way to say you’re getting angry, try s’énerver. For example, Je m'énerve quand les gens sont impolis.  (I get really annoyed when people are impolite.)
How do I use péter un câble?
Amélia va péter un câble quand elle se rendra compte que la chienne de sa coloque a pissé sur son tapis persean!
Amélia’s going to throw a fit when she finds out her housemate’s dog peed on her Persian rug.
Quand je les ai vus ensemble, j'ai pété les plombs!
When I saw them together, I lost it!
(The above examples come from wordreference.com)