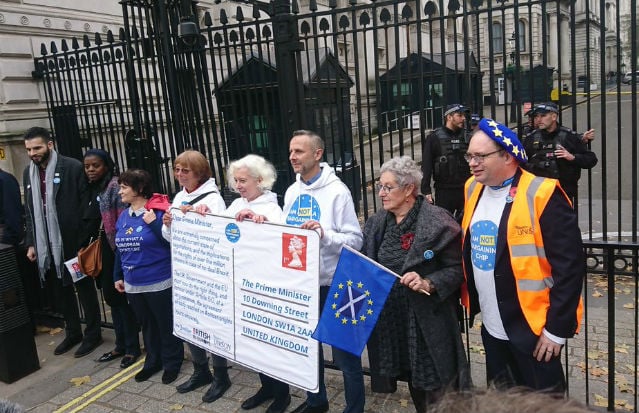 They called on the UK and the EU to safeguard the post-Brexit citizenship rights of approximately five million people living in the UK and the EU. The call comes on a day of action branded ‘the last mile citizens' lobby’.

Campaigners formed a human chain on Monday November 5th from Parliament Square to 10 Downing Street, the official residence of the British PM Theresa May, to deliver a letter from the rights groups outlining demands for citizenship rights to be protected and ring-fenced regardless of the outcome of the Brexit negotiations.

The letter is on its way to @10DowningStreet via our human chain.
?‍♂️?‍♀️?‍♂️?‍♀️?‍♂️?‍♀️?‍♂️?‍♀️?‍♂️?‍♀️
We demand that the #citizensrights of #The5Million are protected and guaranteed regardless the outcome of the #Brexit negotiations.
Come on @theresa_may, do the right thing! #thelastmile pic.twitter.com/oqcTSZG6B3

“Enough is enough – we need the UK government and the EU to honour the commitments already made to us during the negotiations, no matter what,” said a statement from British in Europe.

“We are campaigning, alongside our friends the3million, which represents EU citizens in the UK, for the UK government and the EU to commit now to ring-fencing and implementing the citizens’ rights part of the Withdrawal Agreement under Article 50 – no matter what the outcome on Brexit.”

“You jointly have it within your powers to end this nightmare immediately for over 4 million of us, by taking the true moral high ground and publicly committing to honouring these agreements on our rights – whatever the outcome of the rest of the negotiations,” the3million and British in Europe wrote in an open letter to the UK’s and the EU’s chief Brexit negotiators in September.

Participants in the human chain included social care workers, nurses, unpaid carers and other people who could fall victim to a hostile environment if their rights are not secured in a no-deal scenario. There will also be a rally in Parliament Square and a mass lobby of MPs in Parliament.

Our letter has arrived at @10DowningStreet to be hand delivered by @NicolasHatton founder of @The3Million and Jane Golding Chair of @BritishInEurope.
We're one united family together for one cause. Guarantee #citizensrights for #the5million in case of a no-deal #Brexit. pic.twitter.com/YE23g9HslC

For those who couldn't attend in person but wanted to participate, the grassroots rights movement British in Europe is calling on people to join its e-lobby by sending a letter to their local MP or by taking to Twitter.

We're on our way! Join us if you can or support us by retweeting throughout the day. Thank you one and all.#The5Million https://t.co/mG27ZT00ww

The EU and the UK agreed on a package of reciprocal rights for citizens post-Brexit in the so-called Withdrawal Agreement, first announced in December 2017 and confirmed in a final draft in March 2018.

But those rights are contingent to the UK and the EU reaching agreement on the broader and outstanding Brexit issues, which include the ongoing problem of the Irish border. Campaigners fear they will be left high and dry if the withdrawal agreement is scrapped.

The day of action and the campaign to ring-fence rights regardless of the outcome of the Brexit negotiations has the broad support of a group of cross-party British MPs.

“Fairness, common sense and mutual interest all dictate the rights of EU citizens in Britain and British citizens in Europe should be protected after Brexit. I entirely support those who are campaigning to ensure that this happens,” Dominic Grieve QC, Conservative MP and former Attorney General, will tell Parliament in an address on Monday, according to a statement by British in Europe.

“A significant amount of the anxiety EU nationals in the UK and British citizens in the EU are experiencing about their futures could be alleviated by the UK government seeking agreement with the EU that they will honour their agreement on citizens' rights, even in the event of no deal,” Paul Blomfield, Labour MP and shadow Brexit minister, is expected to add.

Ed Davey, Liberal Democrat MP, will say in his address to parliament that “five million people have been living under a cloud of uncertainty for more than two years now.

The government must guarantee – in law – the rights of all EU citizens in the UK, no matter the outcome of the negotiations.”

The campaign has not only found cross-party support in the UK, but support from European politicians too.

“I am directly affected by this issue,” French Senator Olivier Cadic, who is resident in the UK and represents French citizens in the country, told The Local.

“After more than two years and five months since the referendum it is totally unbelievable to still not know what Brexit means.”

Cadic has joined the campaign to ring-fence citizens rights because he suspects a no-deal Brexit “looks increasingly likely” due to the impasse on the issue of the Irish border. “

“How can we prepare for a no-deal Brexit?” said Cadic, noting that many citizens have already made arrangements based on the terms in the Withdrawal Agreement.

Thousands of Brits in France are in the process of applying for a Carte de Séjour residency permit as they have been advised to do by France's Ministry of Interior.

Thousands of Brits across Europe are also applying to gain citizenship of their adopted countries as a way of guaranteeing their rights.