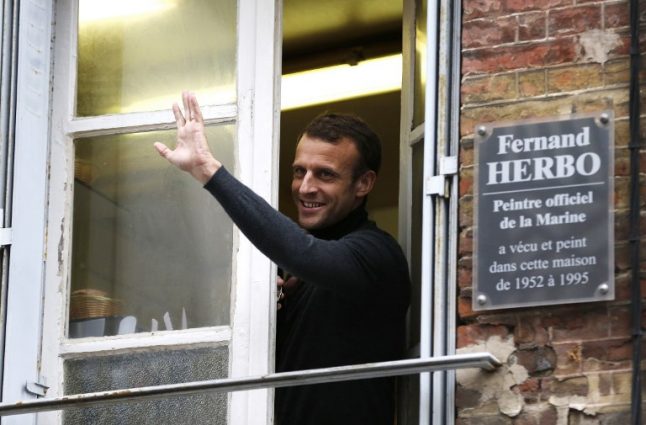 Macron waves to members of the public from inside a gallery n the Normandy town of Honfleur. Photo: AFP

“I'm fine, don't worry,” a smiling Macron, sporting a leather jacket, told reporters in the Channel fishing port of Honfleur after a week of speculation  he was suffering from the strains of office.

“I just value a balanced family life, like all fellow citizens, and sticking to past habits,” said the 40-year-old, adding that he had been coming to Honfleur for 20 years on November 1, a public holiday in France.

The former investment banker elected in May 2017, is known to sleep only four-five hours a night, often working until the early hours when he fires off messages to advisors and ministers.

But French media have speculated that his rare holiday, which saw his agenda cleared for three days and a cabinet meeting brought forward, could be to allow him to recuperate after a series of political missteps. Le Parisien newspaper has reported several unnamed confidants of Macron worrying about his all-day working habits and lack of sleep.

“He's visibly lost weight,” one said. “It's a period of doubt. He's questioning everything,” said another.

Supporters have ridiculed the intense media focus on Macron's rumoured fatigue, with some rolling news channels holding debates with experts to discuss his health and the political consequences.

“When I see the debate about the three-day break of the president, honestly I think we've gone mad,” junior minister Gabriel Attal told France Info this week.

Other aides have stressed that Macron is simply gathering his energy before an intense week-long sequence of country-wide commemorations to mark the 100-year anniversary of the end of the World War I.

The centrist is also set to host dozens of world leaders including US President Donald Trump on November 11 to mark Armistice Day.