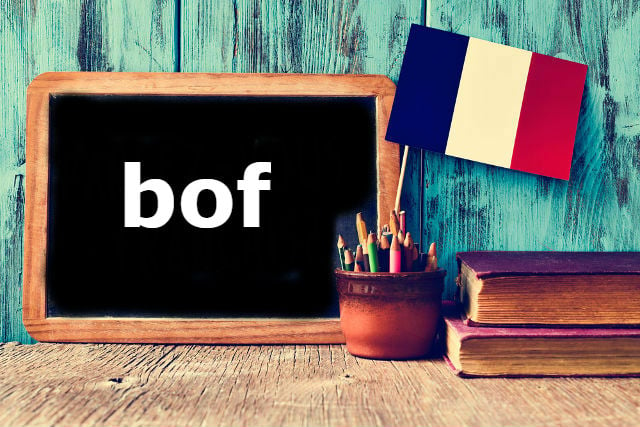 Why do I need to know bof?

If you’re feeling demotivated, indifferent, or want to engage in the traditional French pastime of avoiding being positive (being honest) about things, this is a need to know word.

Plus it’s a French classic, right up there with pfff, exaggerated shrugging and oh la la.

Historically it’s thought that this word might be linked to the acronym of Boeuf, Oeuf, Fromage. All three foods were rationed during the German war-time occupation in France and black marketeers became known as BOFs. Overtime bof  has lost this unscrupulous association and come to mean something quite different.

Bof is a spoken interjection that translates more as a feeling of disinterest or mild unhappiness than an actual word.

It’s nearly always used as an indifferent or slightly negative response to a question, for example, – Que penses-tu de ce film? – Bof. Pas terrible. (What did you think of the film? – Whatever. It wasn’t terrible.)

Similarly bof could also be the response to ‘Don’t you think the film is great?’ (Tu trouves pas que ce film est génial?) or ‘Do you want to go to the cinema? (Ca te dit d’aller au cinéma?), meaning an apathetic ‘not really’ in both cases.

It could also be a slightly depressing reply to ça va? meaning ‘not great’, ‘ok’, or ‘meh’.

Considering that a normal reply would be ‘fine’ or ‘good thanks’ (bien, merci) saying you are just ‘alright’, ‘ok’ or bof actually implies that you feeling a bit miserable.

Finally, if you’re going to use this classic French sound you might as well go the whole hog and Frenchify your gestures too; bof is often said with an indifferent expression and dismissive shrug of the shoulders.

Check out bof’s pronunciation at 2m27 in this video.

How can I use bof?