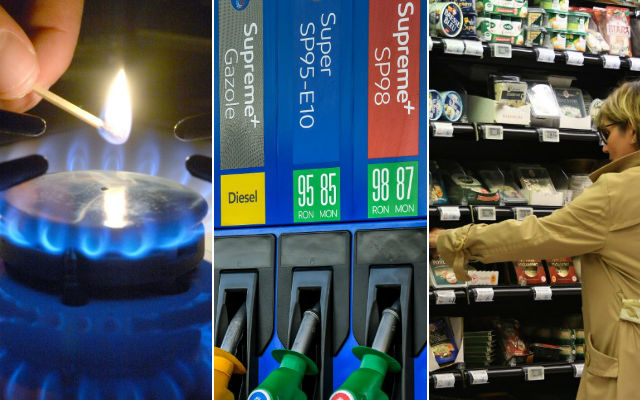 The French government and its President Emmanuel Macron is adamant that the spending power (pouvoir d'achat) of ordinary folk will increase under its administration.

“This month, the French will be able to see from the beginning that our policies pay,” Budget Minister Gerald Darmanin told the Journal du Dimanche newspaper.

Darmanin points to the cut in the annual council tax bills (taxe d'habitaton) that many in France have seen in October as well as the second cut in social security contributions that should see a rise, albeit a slight one, in the take-home amount on people's payslips this month.

But the Journal du Dimanche newspaper has come up with some data that suggests the spending power of French people has been hit hard over recent months mainly due to the rising costs of certain products and services.

For example, the steep hike in the price of vehicle fuel has angered many in France and led to calls for drivers to block roads in protest on November 17th.

READ ALSO: As prices soar here's where to find the cheapest vehicle fuel in France According to figures widely quoted the price of diesel has risen by 23 percent in 2018 while the price of petrol has shot up by 15 percent.

While the public's anger has been directed at the government for hiking taxes on fuel, the main cause of the steep jump in the cost at the pumps is a general rise in the price of a barrel of petrol and diesel since the start of the year.

But that will be no consolation to the 81 percent of French households that have a car – 68 percent of whom use it each day –  and have seen it become much more expensive to run in the last nine months.

But it's not just the prices of petrol and diesel that have risen in 2018.

Smokers in France have seen the price of a packet of cigarettes rise by €1 in 2018. The average cost of a packet is now €7.90 and the government is intent on bringing the price up to €10 a packet by 2020.

The price of gas has also risen steeply in France since the beginning of the year, notably over the last six months, where there have been six consecutive hikes.

In all the price of gas has risen 16 percent in France since the start of the year and it's only going to get more expensive to cook, have hot water and heat your home with gas in November. Energy provider Engie says prices will rise by an average of 5.79 percent from November 1st compared to prices in October.

And then there's the rent prices which have risen 1.57 percent on average in 2018 according to the JDD. Nowhere has seen rent prices soar more than Paris where a law that had imposed rent caps on landlords was scrapped at the end of 2017.

“We've seen a significant average price increase of €1,530 per year and in some extreme cases in the 20th arrondissement more than €450 per month, which amounts to nearly €5,400 per year.”

And then there's the price of buying property. Although price rises and indeed decreases vary widely depending on the region, the general price of properties have risen by 2.8 percent across France in 2018. That figure is thanks in the main to a 3.2 percent rise of property prices in Paris and the surrounding area. Then there's the price of stamps. The famous timbre rouge (red stamp) has risen by 13 percent in 2018 and as The Local reported in July the prices are set to rise again in 2019.

France's La Poste announced it was putting up the average price of its stamps by 4.7 percent in the coming year.

Normal green stamps will increase by eight cents up to 88 cents (10 percent rise) whilst red registered post stamps will surpass the one euro mark and cost €1.05, compared to 95 centimes currently. And then there's the price of smartphones, which according to the JDD, has risen by 7.5 percent on average in 2018.

Other rises in products and services highlighted by the JDD include the flu vaccine which has almost doubled in price from €6.20 to €11.13. Health authorities say the rise in the price of the flu jab is because more strains of the virus are covered by the vaccine.

However, the French public shouldn't feel the price rise too much given that 65 percent of the cost is covered by state health insurance the Assurance Maladie.

The price of sugary soft drinks have also risen in France in recent months with the JDD claiming a can of soda (fizzy drink) has risen by 20 percent, in the main due to the French government's hiking of the so-called “soda tax”.

And then there's salmon.

The price of salmon has risen by 23 percent in France in 2018 mainly due to the global problem of salmon stocks not being able to keep up with demand.

Carrots have also risen in price by 43 percent in France due to a harsh winter and summer heatwave and the price of butter has risen by 10 percent in the past year.

France's statistics agency INSEE revealed in September that across the board consumer prices in France had risen by 2.3 percent in 2018, mostly due to the rising cost of energy supplies and food prices. And let's not forget the steep rises in property taxes in parts of France this year that have weighed heavy on people's wallets.

Some 13,000 communes increased the rate of their taxe fonciere (real estate tax) in 2018. While the increases varied from town to town Limoges and Toulouse saw 4 percent hikes and property and landowners in Nice saw authorities raise the tax by 19 percent.

But while the price rises have not been matched by rises in salaries not everyone is a loser.

Whoever has taken out a loan or a mortgage in France has benefited from extremely low interest rates of around 1.5 percent. In other words the prices of property are increasing higher than the rate of interest.

So how does France compare to is neighbours?

According to figures put together by the JDD when it comes to the cost of a litre of petrol France is ranked second (€1.57) behind Italy where the cost has risen to €1.66.

However France was ranked top when it came to the price of a Big Mac (€4.50) whereas in the UK the famous burger costs €3.80.

Have you found that life in France has become more expensive over the last nine months? Has the rising costs changed your lifestyle?