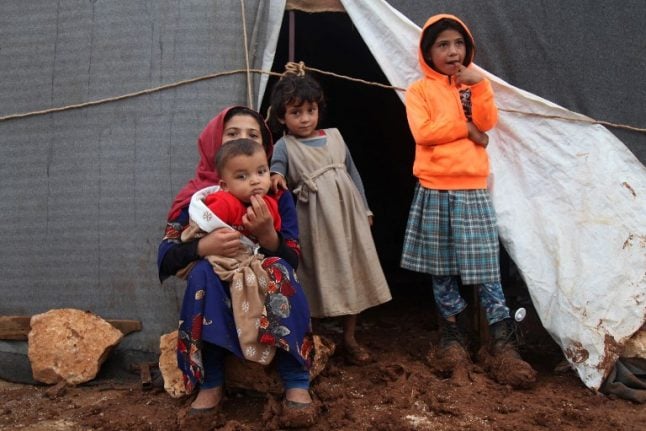 Like other Western nations which experienced a jihadist exodus to Iraq or Syria, France is grappling with how to handle citizens left in the war zone following heavy losses for the Islamic State group.

Last week, France announced plans to start repatriating an estimated 150 children, many of them being held alongside their mothers by Kurdish forces in Syria following IS defeats.

But French officials made clear that the mothers themselves will not be welcomed home.

A few days ago, Nadine — her name has been changed — got a phone call from her daughter-in-law in a Kurdish camp.

The young mother was in tears. “Do I have to abandon my children in order for them to go back to France?” she sobbed.

Right to a fair trial?

There are no schools or activities for children in the camps, where poor hygiene causes regular bouts of diarrhoea, vomiting and skin infections.

Lawyers for the mothers, pushing for the whole families to be repatriated, have complained for months of “deplorable” conditions in the camps.

Reluctant to bring extremists back onto home soil, France has so far insisted its captured nationals must go on trial locally.

Some 260 adults and 80 minors have already returned to France from Syria or Iraq, and earlier this year French authorities estimated that more than 700 adults and 500 children were still in the war zone. Several French adults have already been tried in Iraq and their children repatriated.

But in Syria, most of the remaining French nationals are being held in northern Syria in territory which, while under Kurdish control, does not constitute an internationally recognised state.

Kurdish forces have repeatedly insisted they will not try foreign prisoners and have called on the jihadists' home countries to repatriate them.

With a few exceptions such as Russia, Indonesia and Sudan, most countries have, like France, proved highly reluctant.

Houry said the idea that France could leave the Kurds to put its nationals on trial was “a fiction” that it was maintaining in a bid to avoid public alarm at a wave of impending jihadist returns.

Lawyers for the mothers, meanwhile, say it is a travesty that a country which touts itself as a beacon of human rights would separate parents from children and leave its citizens in a war zone.

William Bourdon, a lawyer for several of the women, insisted that “the vast majority have had no combat or active role in IS and have a right to a fair trial, which can only take place in France”.

Nadine began sobbing at the thought of the choice facing her daughter-in-law.

“Having to give away your children without knowing whether or not you're going to see them again one day, or who will be looking after them — can you imagine doing that to someone?” Nadine said in a phone call.

“My daughter-in-law is still breastfeeding the youngest, just eight months old. It's an unspeakable cruelty.”

Houry predicted that many of the mothers will refuse to separate from their children — an assessment shared by relatives in France.

“It's their comfort, their only reason for living,” said one resident in northern France, whose sister is still in Syria.

“My daughter-in-law will not give up her little one like that, not even knowing what's going to become of herself,” said Sarah, a pseudonym.

Sarah's son and his wife set off for Syria in 2016 and were arrested a year ago by the Kurds.

The mother and son are both in a camp, fending off illness and chasing away mice from their tent, Sarah said.

Like the families, child psychologist Serge Hefez believes separating the children from their parents can only bring more harm.

“Keeping a link with a parent, even if it's visits in prison, is essential for a child,” he said.

Otherwise, he warned, the children run a greater risk of radicalisation themselves — turning the absent parent “into a hero or a martyr”.