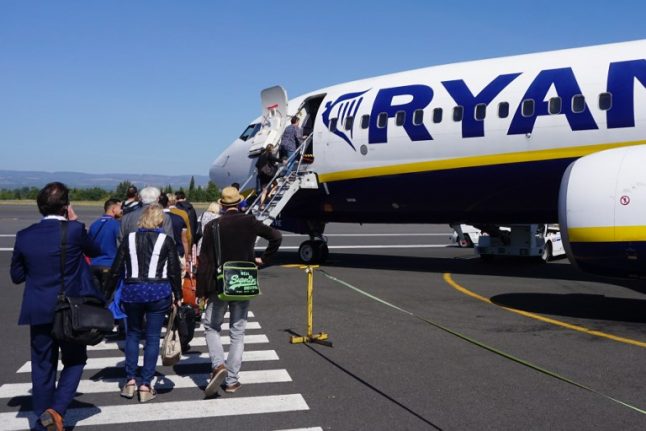 Ryanair to charge for cabin luggage

Ryanair have services to and from 31 different destinations in France so this is potentially important information for many passengers.

From November passengers on Ryanair flights will still be allowed to take one “small personal bag” into the cabin, as long as it will fit under the seat in front.

But they will have to pay if they also want to take a 10kg bag, such as a pull-along suitcase, on board (unless they reserved their ticket before August 31st, this year).

Passengers will have to pay €8 for the cabin luggage if they include it in their reservation or €10 if they pay online at a later date.

Ryanair insist the move is not aimed at making money but was intended to “improve punctuality and reduce boarding gate delays”.

Landlords in France might not enjoy November although those tenants in trouble for not paying their rent can breathe a sigh of relief.

As of Thursday November 1st the annual winter truce (treve hivernal) , as it is called comes into force which basically forbids landlords and courts from evicting tenants until the weather warms up next April..

What is the truce exactly?
La trêve hivernale runs for five months from November 1st and marks a period when French landlords are not legally allowed to evict their tenants for any reason.
The truce is meant as a humanitarian measure to ensure people don't become homeless and end up sleeping on the cold winter streets.
Basically the end of the truce coincides with the arrival of spring and warmer weather.
From April 1st, police or bailiffs can start carrying out eviction notices that have been piling up throughout the winter months or weren't carried out before the truce came into effect.
The rules of the truce also prevent landlords and providers from cutting off gas and electricity to tenants during the time period. Although it doesn't cover those living in squats or buildings deemed dangerous.

Bad news for those who use gas to heat their homes and for cooking. In November tariffs with the provider Engie will rise by an average of 5.79 percent from November 1st compared to prices in October.

Adults who are disabled and receive the AAH state benefit (Allocation aux Adultes Handicapés) will see a hike in the money they receive.

The top amount is currently €819 per month but from November that will rise to €860 per month.

The benefit is aimed at “guaranteeing dignity for disabled people” by giving them a minimum amount of resources required. The monthly amount is set to rise to €900 per month in November 2019.

Any former private industry workers with a complimentary pension with Agirc or Arrco will see the amount revalued by 0.6 percent.

There are two public holidays in France in November.

The first is on Thursday November 1st which will be a day off for all workers but the second falls on Sunday November 11th – the anniversary of the 1918 Armistice so unfortunately workers won't get the day off.

Drivers are set to protest in France in November against the ongoing rise in the price of vehicle fuel.

A petition calling for action has gained hundreds of thousands of signatures and now drivers n France look set to block roads across the country on Saturday November 17th in anger over the price of petrol.

There may also be road blocks on November 7th so keep checking in with us as we will have more information about any protests nearer the time.

It is not clear which rads will be affected on November 17th but the péripherique ring road around Paris looks a likely target.