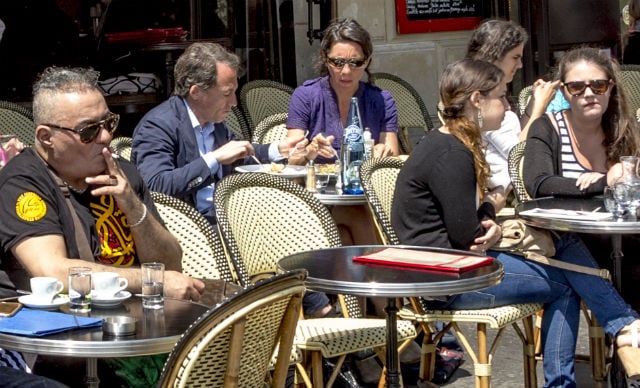 Everyone knows that enjoying a drink or a meal on a cafe terrace in France means inhaling large quantities of cigarette smoke… and that's just the non-smokers.

For readers of The Local, cigarette smoke takes away from the cafe terrace experience and the majority of them think it's time it should be banned.

In a Facebook poll, 73 percent of people said they thought it should be banned while just 27 percent voted in favour of keeping it.

Similarly, in the same poll on Twitter 69 percent voted in favour of banning it and 31 percent in favour of keeping it.

Many said they felt that they simply wanted to be able to enjoy the pleasures of a cafe terrace without breathing in a cloud of smoke or a “cloud of cancer” as one reader put it on Twitter (see tweet below).

Because I shouldn’t have to walk through a cloud of cancer to get into a café. Some pointed out that they feel forced to change their own behaviour, sitting inside in an effort to avoid the inevitable smoke, rather than enjoying the pleasures of the cafe terrace.

“As nonsmokers, and me suffering from asthma, we don’t eat or drink out on the terraces of cafes and restaurants because we don’t want to end up breathing in cigarette smoke,” said reader Jennifer Taylor who divides her time between the London area and Laval in western France.

“Even if seated away from smokers at the start, you can never tell whether smokers might arrive later, or someone might light up afterwards.

“Smokers might complain their rights to sit and smoke are curtailed by no smoking rules, but what about nonsmokers’ rights to sit where they want without having to suffer this air pollution?”

Smoking was banned in French cafe's and restaurants in 2006, which has effectively meant terraces outside are more than often than not dominated by smokers.

Many restaurants and brasseries have installed covered shelters that when closed during cold or wet weather makes the terraces feel like an indoor area. Officially smoking is banned in these covered terraces but most bars turn a blind eye.

Authorities in Pars have tried to get tough given that passive Passive smoking is believed to be behind about 10 percent of the 70,000 deaths due to smoking each year in France.

But what about outdoor terraces?

As many readers will no doubt be aware, outdoor cafe terraces in France can be pretty intimate, particularly in large cities, which can mean that even if though you're technically outside, it can be hard to avoid breathing in other people's smoke.

This can mean that sipping your glass of wine or eating your croque monsieur often comes with a side of nicotine. “I pay for my meal as well so why should I be forced to inhale the second hand smoke of other diners,” reader Sandra Frances wrote.

“I don't force the person next to me to drink my glass of wine so why should I be forced to inhale cigarettes?

“It's difficult to understand how this is still even being debated in France as so many places in the world accept that it is the 21st century and smoking is socially unacceptable. If smokers wish to smoke themselves to death, it is indeed their right…just not around me.”

This comment chimed in with a lot by other readers who were baffled by the fact that France still has so many smokers and that smoking was allowed in so many places.

However not everyone was quite so down on smokers — even those that agreed it should be banned on terraces — with some in this group suggesting that smokers' needs should also be taken into account.

Reader Yvette said that there should be “a well separated closed smoking area (like you already see in several countries)”.

“I smoked for 12 years but I always asked the people around me [if it was ok to smoke]… In France it's evident that you can just smoke whenever you want, even if there is a child or sick person.”

One reader took a slightly more philosophical approach to banning smoking on cafe terraces in France (see tweet below).

I don’t smoke and I don’t like people smoking near me but there are lots of things I don’t like and most of them are not banned.

And of course, there were those on the other side of the divide who believe that smokers should be allowed to smoke on cafe terraces, saying that after all, they are “outside”.

“When the weather is cold or wet, who has to sacrifice and stand outside? The smokers. So leave them the terraces,” one reader pointed out.