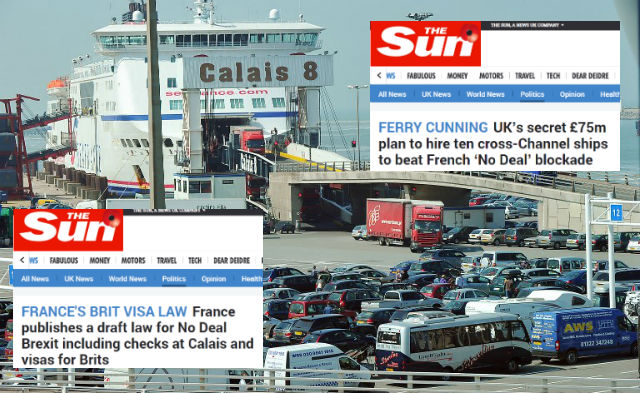 For British tabloid journalists, bashing France is like bashing minor members of the royal family. It always makes a cheap headline. Facts can be stretched or invented. There is rarely any come back.

The Sun, a habitual offender but not a solitary case, has been at it again. Harry Cole, the newspaper’s Westminster Correspondent, wrote last weekend that the British Government had a “secret plan” to hire ten cross-channel ferries to “screw over the French” in the event of a no-deal Brexit.

The £75m plan, he wrote, “comes amid threats from France to trigger chaos at ports if talks collapse”. The ten ferries – ten, mind you, about half those operating on the route – would be diverted to Zeebrugge and Hook of Holland. UK officials would select which trucks were allowed to sail to Britain.

The story is not based on truth.

Whatever side of the Brexit fence you're on, the Sun should be ashamed of itself with this story that is misleading and factually wrong. The French are NOT threatening to “trigger chaos at ports if talks collapse”. Quite the opposite.
https://t.co/f4ZoRoXrTW

There are no “threats from France to trigger chaos at ports if (Brexit) talks collapse”. Au contraire, France has written a draft law to permit emergency measures to keep cross-Channel trade flowing as freely as EU rules permit.

This is more than the British government has done to prepare for No Deal. Consider the bumbling, evasive answers on future migration, resident’s rights and border controls given by the Home Office minister, Caroline Nokes (pictured below), and senior officials to a House of Commons Committee on Tuesday. Xavier Bertrand, president of the Hauts de France region which includes Calais, Dunkirk and Boulogne, tweeted earlier this month: “No! Closing the tunnel and port at Calais to the British in the event of no agreement on Brexit is not being considered. Who can believe in such things? We must do everything we can to keep the traffic flowing.”

He gave the same message to the British Transport Secretary, Chris Grayling, when he visited Calais last week.

The assurances were greeted by two hard-line Brexiteer MPs, John Redwood and Bernard Jenkin, as proof that there was no reason to worry about a No-Deal Brexit. Talk of a French blockade, they said, was being pushed by Remainers as part of a new “Project Fear”.

No it’s not. It’s being pushed by The Sun and by the Brexit Secretary, Dominic Raab.

He has claimed, without evidence, that French officials plan to “go slow” to worsen the problems which would inevitably be caused if Britain crashes out of the EU on 29 March.

There is no go-slow plan. French officials would, however, be obliged to obey EU regulations on animal health or food safety or industrial products when trading with a third (ie non-EU) country. This in itself could gum up the works at Calais.

In so far as there is any truth in The Sun’s story, it is a wilful misinterpretation of one of several plans floating around Whitehall to ensure that vital supplies of food and medicine reach Britain in the event of No Deal.

It is inconceivable that Dutch and Belgian ports would be able to take the huge flow of traffic across – and under – the Straits of Dover. In any case, they would be subject to the same EU rules on exports to a “third country” which would impede traffic through Calais.

READ ALSO: No, France does not want to inflict maximum pain on Brits living here The Sun turns this speculative story on de facto, ferry nationalisation into an anti-French tirade. A source in the “the Inter-Ministerial Group for Borders Planning” tells the newspaper: “We could make a profit and screw over the French. Tell me what the downside is?”

If this quote is accurate – and surely The Sun would not have invented it – it is more disturbing than the rest of the story. It suggests, as some of Raab’s comments suggest, that hard-line Brexiteers in the British government are not preparing for a No Deal Brexit. They are preparing to blame the French for the problems that No Deal will cause.

French government has got no plans to close down #Calais: lots of people confused about potential threats around No Deal. Customs aren’t the issue, maybe delays due to eventual light sanitary controls & #brexit exit bill won’t trigger any suicidal economic mission by ?? ports https://t.co/dmE4J4Kbw9

Blaming France is a common stand-by for British governments as well as British tabloids. In 2003 Tony Blair and his foreign secretary Jack Straw helped stoke support for the Iraq war by lying about President Jacques Chirac’s motives for opposing the conflict.

This time around, however, Cross-Channel hostilities could have disastrous implications for the 150,000 or so British citizens living in France. The French draft law on “no deal”  makes it clear that Paris will be generous with resident Brits so long as Britain is generous – as promised – with French and other EU citizens in Britain.

Minister Nokes’ bumbling performance on Tuesday on this and other issues suggests that the British government has not yet decided how to keep its word on EU residents – or whether to keep it at all.

Imagine if that issue becomes entangled next spring with allegations that France is trying to “blockade” and “starve” post-Brexit Britain.

It is time for everyone, even The Sun, to grow up. French-bashing is no longer a game.

John Lichfield is a former France correspondent and foreign editor for the Independent newspaper. You can follow him on Twitter @john_lichfield