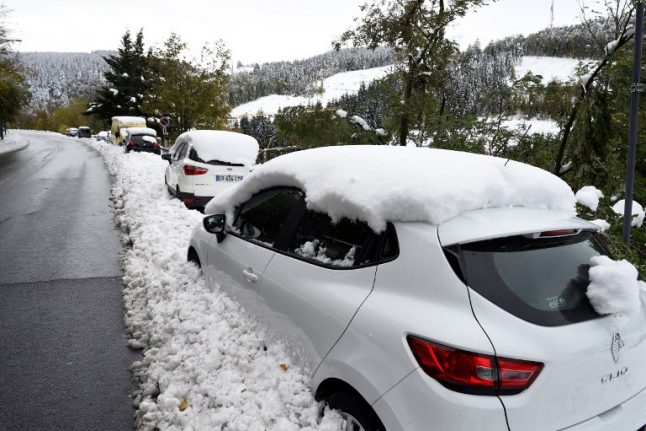 The Route National 88 in central France were hundreds of motorists were left stranded by the snow. Photo: Twitter

Winter arrived early in parts of France on Monday and it took many by surprise, not the least the 950 motorists who were left stranded on roads in the Haute-Loire and Loire departments of central France when heavy snow fell on Monday evening.

On Tuesday morning there were still some 195,000 homes in France without electricity due to powers cuts.

Some 17 departments in central and north eastern France remained on alert for snow on Tuesday morning (see map below). The wintry weather is due to head from the Massif Central towards the Champagne and Ardennes departments throughout Tuesday morning. The heavy snowfall mainly affected the departments of Haute-Loire, Lozere, Loire, Puy-de-Dome, Cantal, Aveyron, Correze and the Creuse. But there were also wintry showers in Burgundy and the Rhone-Alpes.

In parts of the Haute-Loire there were reports of 50 cm of snow falling in local areas.

It was here where many motorists were caught out and had to spend the night in their vehicles after roads became blocked. The Route Nationale 88 was particularly badly hit.

Several hundred were also evacuated from their cars and spent the night in emergency accommodation. Jean-Pierre Marcon, the president of the Haute-Loire departmental council criticized both lorry drivers for taking to the roads during heavy snow and drivers who should have changed their tires to be more suitable to the icy conditions.

While drivers took to social media to criticize the lack of warning and the absence of snow plows authorities said abandoned cars had blocked snow clearing vehicles from gaining access to many roads. Members of the public had also been warned that winter weather was on its way to the region.

“It's not normal that they allow lorries to drive when the roads are not suitable,” one angry driver called Bruno, whose vehicle was blocked near Pertius told France Info.

Images posted on Twitter by drivers revealed the extent of the travel chaos caused by the snow, with videos showing cars and trucks stranded on roads while some drivers attempted to push their cars out of the deep snow.

Driving proved treacherous in all departments affected by the snow. In Aveyron, a 75-year-old woman was killed in a pile-up that left four others seriously injured near the town of Ségur.

At one point some 7,000 homes were left without electricity due to a power cut although that number had been reduced to 4,000 by Tuesday morning.

Rail traffic between Lyon and Saint-Etienne has been impacted with reports that 400 passengers spent the night on a TGV train while others had to be given hotel accommodation.

TER train services in the region were badly hit on Tuesday morning.

Motorists in Haute-Loire are advised to avoid travel on Tuesday with several roads remaining blocked due to falling trees.