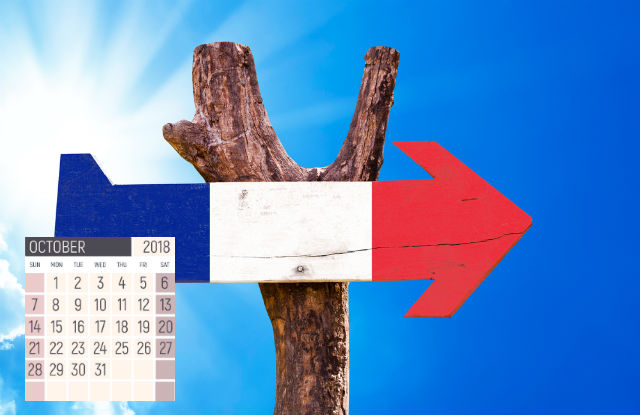 The Human Rights Defenders World Summit will be held in Paris on Monday.

The event will celebrate the progress in human rights made over the past 20 years and look at how to improve them with sustainable development and the help of democracy over the next 20 years.

The annual event for male professional players will see tennis champion Rafael Nadal return to the sport after taking nearly two months off after an injury that saw him retire from the US Open semi-final in September. French MPs are set to vote on the social security part of the 2019 budget on Tuesday.

On Friday, MPs already voted in favour of an amendment to the social security budget which provides extended paternity leave for fathers whose newborn is premature and hospitalized.
French 'rogue trader' Jerome Kerviel will reappear in court on Tuesday to find out if a decision made by an industrial tribunal back in 2016, ruling that Societe Generale should pay him €450,000 for firing him, will be upheld.
In 2016, a lawyer for Societe Generale, Arnaud Chaulet, said he would appeal the “scandalous” decision, recalling that Kerviel had been found guilty of gambling away €4.9 billion ($5.5 billion) of the bank's money. French 'rogue trader' Jerome Kerviel. Photo: AFP
Meanwhile, the Council of Ministers will hear presentation on measures to combat violence in schools.
Among the suggestions will be placing police officers in schools for a few hours a week however many have already spoken out against this measure.
Wednesday Oct 31st
The French government is set to present its winter plan for protecting the homeless from the cold.
This sees the government make extra places available in shelters for those living on the streets when the temperatures plummet.
Wednesday is Halloween and you can make the most of this ghoulish holiday by visiting the spookiest spots in the French capital.
On top of that, Wednesday also marks the beginning of the Salon du Chocolat in Paris.
The Salon du Chocolat is a yearly trade fair for the international chocolate industry and is a must-visit for any chocolate lovers. Visitors take pictures of chocolate-made sculptures displayed at the Salon du Chocolat (Chocolate Fair) in Paris in 2016. Photo: AFP
Thursday Nov 1st
Thursday marks the beginning of the annual winter truce.
That means that from November 1st until March 31st no tenant can be forcibly evicted from their flat, so those landlords who are trying to evict tenants, for whatever reason, will have to wait until the spring otherwise they could face up to three years in prison and a €30,000 fine.
Thursday is also the first day of the Politikos film festival in the capital city of Brittany Rennes, showcasing films dedicated to raising questions about political power.
And for all those living in France, Thursday is a public holiday in honour of All Saints' Day. French Prime Minister Edouard Philippe is set to visit Vietnam in honour of the 45th anniversary of diplomatic ties between the two countries.

The prime minister will stay until November 4th will stopover in Hanoi for meetings on the subjects of politics and economics and will also visit Ho Chi Minh City.

The annual assembly of bishops is set to take place from November 5th – 8th in France's fabled shrine of Lourdes.

This year the bishops of France will welcome victims of pedophilia committed by clerics of the church.

French President Emmanuel Macron is set to visit important areas of conflict from World War I on a tour that will last from November 4th until Remembrance Day on November 11th.

The 11th Route du Rhum event is set to kick off from Saint Malo on Sunday.

The event, which takes place every four years, is a single-handed transatlantic yacht race with the course running between Saint Malo in Brittany and Pointe-à-Pitre in Guadeloupe.