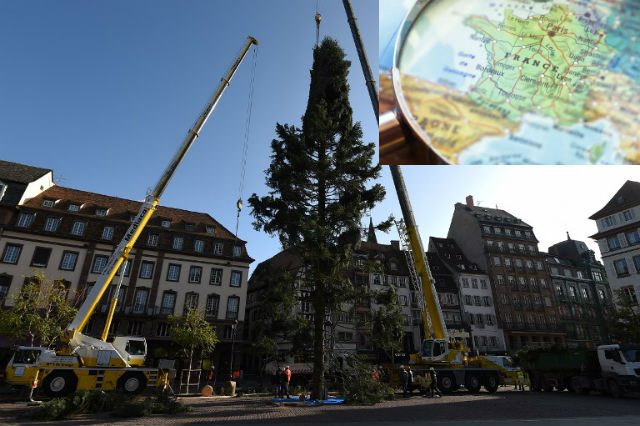 Corsica was placed on red alert for high winds on Monday as storm Adrian blew in and forced residents to seek shelter indoors.

There were also warnings of coastal flooding and the videos below show exactly why residents on the island are being warned not to travel by car until the storm passes.

The alerts are due to remain in place until Tuesday morning. You can find out more information on the latest weather warnings across France, which include snow warnings in central France, by CLICKING HERE.

Well in a certain manner it is.

The French PM Edouard Philippe was set to announce on Monday the merger of the two councils in the two French departments that make up the historic region of Alsace: Haut-Rhin and Bas-Rhin.

Many in Alsace were furious when the previous government under President François Hollande changed the map of French regions which involved theirs being swallowed up into the new mega region of Grand Est.

But local politicians were claiming Alsace is back on Monday with the expected merger of the two departmental authorities.

“It's much more than a fusion, it's the creation of a new council of Alsace, which brings together the competencies of the central state, the region and the departments,” said Frédéric Bierry, Chairman of the Bas-Rhin council.

According to him, in Alsace, “nobody has got over the creation of the Grand Est council”. “François Hollande decided to redraw the map of the regions of France from his office, the Alsatians have never accepted the disappearance of an Alsatian council,” he added.
“This is its long-awaited rebirth”.

The shocking death of a British mountain biker at the hands of a French hunter continues to have knock-on effects in the Alps.

The 34-year-old Briton, Marc Sutton was fatally injured while out on a ride on a well used, but hard to access mountain track near the village of Montriond in Haute-Savoie.

While his friends and the community around Montriond and nearby Morzine have called for restrictions on hunting at weekends some local mayors have taken very different kinds of measures.

The mayor of the Alpine village of Jarsy has passed a decree that forces mushroom pickers and other walkers to wear fluorescent jackets while out in the mountains in order to make it easier for hunters to spot them and not mistake them for a wild animal, as is believed to have been the case with the shooting of Marc Sutton.

Although those who don't follow the words of the decree will not be fined.

But its hardly the response anti-hunting groups were after.

Strasbourg gets its Christmas tree already!

It's not even November but the eastern city of Strasbourg is gearing up for Christmas with the arrival in Place Kleber of the annua sapin de Noel.

Last year's giant Christmas tree had to be replaced various times due to the trunk splitting but organisers are hopeful this year's sapin will be more sturdy.

The tree was felled nine days ago in the Wangenbourg forest in the department of Bas-Rhin.

The tree will be decorated in the coming days in the theme of “letters to Santa Claus”.

Who is responsible for murdering one hundred rabbits in the Côte d'Armor department in Brittany? Police have launched a call for witnesses after more rabbits were found dead in the area.

Since late August, around ten properties have been targeted by the rabbit assassin. “Cages are opened, then the animals are killed in cold blood with a pointed object and then just left there,” police, who also advised rabbit owners to lock up their rabbit hutches tightly, told Ouest France newspaper.
So far police have had no luck tracing down the serial killer and have little to go on. From the one sighting of the suspect the police were able to glean that he wore a rain coat and a hat.
CLICK HERE for more on this story.