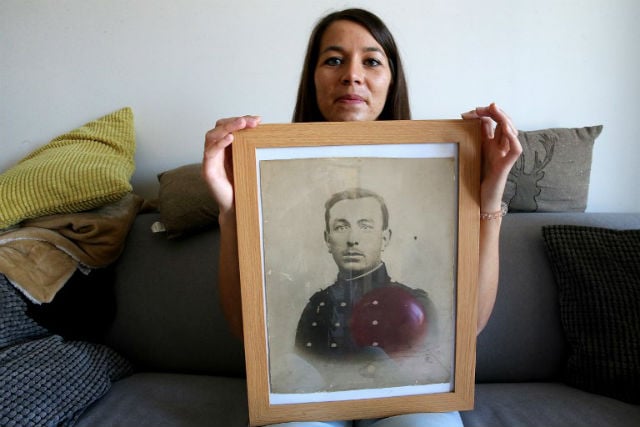 Emeline Leger holds a photo of her grandfather Philoxime Deson. Photo: Francois Nascimbeni/AFP
Her grandfather was just 10 when his father died and he rarely spoke about him, acknowledging only that “he had been gassed in the trenches”.
But several years ago Leger, 31, began digging into her family history. She uncovered records of her great-grandfather's birth and marriage and, just last year, his death in an asylum at the age of 46.
“He went crazy. He was committed for barely a month and then died here, on May 18, 1931,” Leger told AFP as she and her parents visited for the first time the grounds of what is now termed a psychiatric hospital in Premontre, northern France.
The new combat horrors of World War I — heavy artillery, poison gas and bloody yet often fruitless trench warfare — would haunt thousands of the young men lucky enough to survive the carnage.
Yet at the time health authorities poorly understood what is now recognised as post-traumatic stress disorder, and were ill-equipped to treat those who sank into depression or worse.
In many cases, the victims became estranged from their own families, or were hidden away in asylums.
“My mum's older sister always heard that he died of a brain tumour. I think that was a way of hiding the fact that it was shameful to have someone put away in an asylum,” said Leger, holding the only photo of her ancestor.
'Strange feeling'
Philoxime Deson was born on March 24, 1885 in the village of Cuirieux, not far from the Belgian border and what would become the war's Western Front. He joined France's 25th artillery regiment in August 1914 and served throughout the four-year conflict, fighting at Verdun and along the notorious Chemin des Dames, or Ladies' Path.
After his return to civilian life, he moved six times with his four children before being committed to the asylum at Premontre, a 12th-century former abbey which had been occupied by the Germans during the war.
“It's really a strange feeling,” Leger's mother Chantal said while touring the meticulously pruned cypress trees and symmetrical flower beds on the site's grounds.
She said she had no idea about her grandfather's later years, and that learning his fate from Emeline “was very emotional for me”.
The family was unable to visit the hospital itself, which is off limits to the public, to see where Deson spent the final weeks of his life.
“I wanted to hurt myself. I can't eat because I've got nothing left inside me, no heart, no stomach, no guts… My organs were taken from me. I don't know who did it. He must be upstairs,” Deson wrote during a medical
examination in March 1931.
On the document, which Leger obtained from regional archives, a doctor wrote: “His speech is a bit slow, pupils fixed. Psychologically weak, euphoric, unaware of the situation.”
'Did he realise?'
The report, the only record kept by the archives, has reinforced the family's conviction that Deson was severely afflicted by his experiences along the front.
But it also raises new questions about the ancestor nobody seemed to want to talk about.
“How did this post-traumatic stress manifest itself?” asked Leger, who works in public relations in Chalons-en-Champagne.  “Did he go numb inside from all he saw and then wasn't able to recover from
it? Did he realise he was losing his mind?”
Her own father said little, but “his older brothers must have known more about it — maybe they made up a story for him”, she said. “Maybe they just said 'he was in the war' and that was it, because the end was not so glorious.”