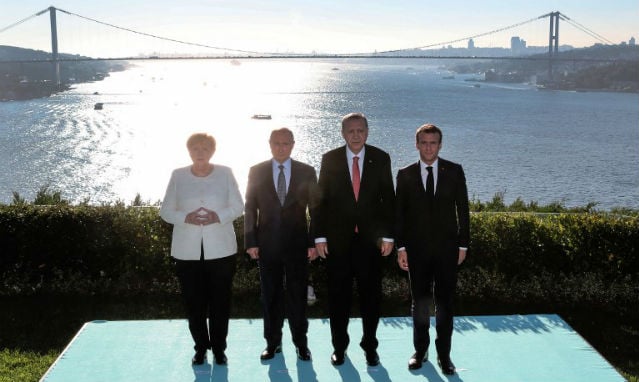 German chancellor Angela Merkel, Russian President Vladimir Putin, Turkish President Recep Tayyip Erdogan, and French President Emmanuel Macron. Photo: Kayhan Ozer/Pool/AFP
The disagreement led to a rare dispute between the close European allies on Friday, when Macron implied that Berlin was engaging in “pure demagoguery” after Merkel announced a freeze on arms sales to Riyadh.
The suspension would remain in place until the circumstances of the dissident's murder inside the Saudi consulate in Istanbul were clarified, she said.
The tone was more measured when the two leaders had a “relaxed exchange” on the sidelines of a Syria summit in Istanbul on Saturday, Macron's office said, adding that they had agreed not to announce their next positions on the issue without first coordinating “at the European level”.
However in separate news conferences after the end of the summit, the divide remained: Merkel stood by her “decision to stop all arms exports” to Riyadh, while Macron said that any sanctions should be made at the “European level” and “not limited to this or that sector”.
Macron also reiterated his claim that there was no moral link to be made between Khashoggi's death at the beginning of this month and Saudi Arabia's purchase of French-made weapons.
Once it was established who was responsible for the killing, “sanctions can be taken”, he said, but they must be “coherent, comprehensive and extremely concrete and proportionate”.
Earlier in the week Germany called for EU countries to follow its lead and suspend arms sales for the moment to Saudi Arabia, prompting a dismissive response from Macron — Saudi Arabia is the country's second biggest customer after India.
“What is the link between arms sales and Mr Khashoggi?” Macron said on Friday, calling it “pure demagoguery to call for a halt” to exports, which have “nothing to do with Mr Khashoggi. One shouldn't mix everything up”.
The remark was interpreted as a rare veiled criticism of Merkel. Macron added that if Saudi Arabia is to be sanctioned, “we must do so across the board”.
“In that case, we should stop selling cars,” he told reporters — another possible dig at Germany, a massive auto exporter.
Last month — before the international backlash against the Saudi kingdom — Germany approved 416 million euros ($470 million) worth of arms exports to Riyadh for 2018.
Khashoggi's killing has tainted the image of Crown Prince Mohammed bin Salman, who has positioned himself as a Saudi reformer, and tested ties between Washington and Riyadh as Western powers demand answers over who ordered the hit and the whereabouts of the body.
Prince Mohammed, the kingdom's de facto ruler, has denounced the “repulsive” murder, denying any involvement. 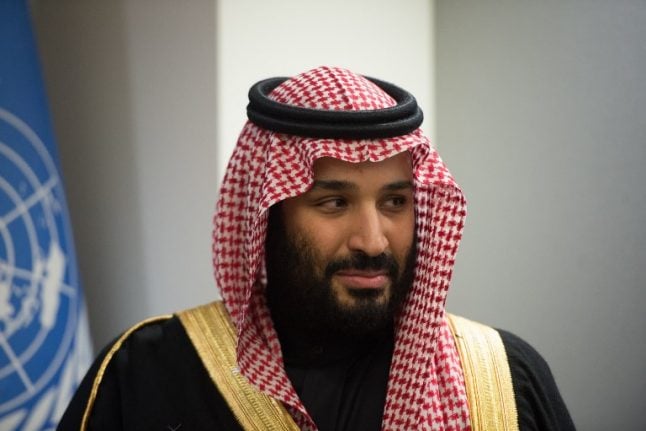