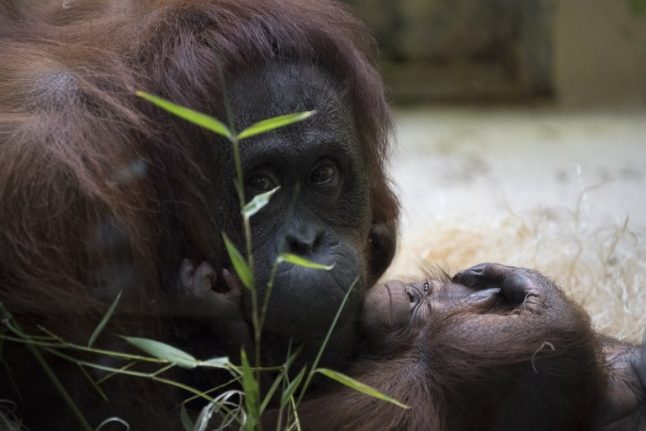 The new arrival was seen by reporters at Paris' Jardin des Plantes cradled in the arms of her mother, Theodora, and both mum and baby are said to be doing well.

Orangutans are among the world's most endangered species, with just an estimated 50,000 left in their natural habitat in the rainforests of Borneo and Sumatra.

Java is the fifth of her kind at the Menagerie du Jardin des Plantes, which originally opened its doors in 1794 on Paris' Left Bank and recently unveiled plans for a new three-million-euro ($3.4-million) orangutan enclosure.

Her father, Banggi, a young male born in Spain in 2006, has been separated from mother and baby “because in nature the males don't raise their young,” the zoo said in a statement.

VIDEO: France's oldest zoo welcomes its youngest member: Java, an eight-day-old baby orangutan. Orangutans are among the world's most endangered species, with just an estimated 50,000 left in their natural habitat in the rainforests of Borneo and Sumatra pic.twitter.com/F1u3LR0yRC

Matriarch of the zoo's orangutan troop, Nenette, has been a fixture there since her arrival in 1972 after being rescued from poachers in Borneo.

Orangutans, often considered the least sociable of the great apes, spend most of their lives in trees, using their dextrous hands and feet to swing from branch to branch.

In the space of two decades, their population in the wild has halved, and up to 80 percent of their natural habitat has been destroyed.